Israel Folau versus hate and intolerance

Australian sportsman Israel Folau has clear views about sinners and is not afraid to express them.

For that he has been called homophobic and accused of expressing “divisive and discriminatory beliefs”.

And, according to many in the community, he should be sacked for expressing the views he has.

Whatever way anyone interprets Israel’s statements, he must have known he would face the sack given the clear wording of Rugby Australia’s policy. Anyone reading the policy below, would be convinced that Rugby Australia would be justified in terminating his contract.

Rugby AU’s policy on inclusion is simple: Rugby has and must continue to be a sport
where players, officials, volunteers, supporters and administrators have the right and
freedom to participate regardless of gender, sexual orientation, race or religion and
without fear of exclusion. There is no place for homophobia or any form of
discrimination in our game and our actions and words both on and off the field must
reflect this.

Rugby Australia, of course, has the right to do just that but, by doing so, it has set itself up as the judge and jury of what is homophobic and discriminatory. 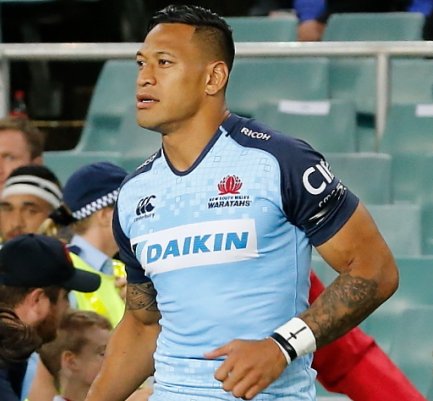 It is neither homophobic nor discriminatory to say that unrepentant sinners are going to hell.

It is a matter of opinion based on a belief system that is personal and genuinely held. And it is genuinely held because Christians believe the Bible to be the ultimate authority on our lives.

In this case, it has to do with sexual sin. A sexual union is only between a man born a man and a woman born a woman. That union is exclusive and, usually, for life.

According to the Bible, any other sexual activity is sinful. If anyone practising sexual sin does not repent, they will spend eternity separated from God. But it is not just sexual sinners who will be rejected, but anyone who rejects God’s offer of eternal life, will be rejected in eternity.

It’s a simple, clear choice. Choose the free gift of salvation and eternal life in heaven, or reject it and spend eternity in hell.

But the key thing here is that is a choice. God does not force Himself on anyone, but His arms are always open and He will always forgive a repentant sinner.

But back to Rugby Australia and the fatal flaws of a policy that decrees what is acceptable speech with regard to homosexuality. I find it divisive and discriminatory.

If Israel Folau’s views are deemed so unacceptable, it is an over-reaction of the highest degree.

As much as anyone may find Israel’s view repulsive, have they not thought it possible that their views are far more repulsive.

To put it another way, no organisation would set up a policy that denied a homosexual the right to express his beliefs based on the premise that it ran counter to the Bible.

And that is not what is being proposed.

Israel Folau and anyone else has the right to say that homosexuality is wrong.

Conversely, anyone has the right to say that there is nothing wrong with homosexuality.

Where the line should be drawn is when real and repulsive vilification and acts of violence take place.

No one would deny such things are utterly unacceptable.

Loving and respectful to speak up against sin

Christians are commanded to love and respect everyone. It would be neither loving nor respectful to not speak up and warn sinners that there are consequences for living contrary to God’s best plan for humans.

We can debate all day about the difference between free speech and hate speech and the perceived dangers therein, but it is a step too far to say Israel’s statements represent true hate and intolerance.

It could be said that the real hate and intolerance is the dialogue coming from those who are calling for Israel to be sacked and silenced for defying his employer and speaking out.

Praise, not condemnation for the “right” words

If he were speaking up in support of homosexuals despite what his employer’s policy was, he would be praised by the very same people who are now condemning him.

Some of these people believe they are tackling head on what they see to be hate and intolerance, but are doing so with an even more vindictive form of speech that is neither productive nor helpful.

However, the great news is that even the most vile sinner (of which I was one), can experience the joy of salvation by simply taking God at His Word and repenting.

It is the best decision you will ever make and it has eternal benefits.

But who do you say Jesus Christ is?

Another thing is who you believe Jesus Christ to be. To this point I’ve only spoken about God in the eternal, Fatherly sense. However, a real, flesh and blood person, Jesus Christ, lived and died about 2000 years ago.

He was the incarnate form of God the Father and by his life, death and resurrection, made it possible for a wretched, sinful person like me to be acceptable to Him.

The Bible says: For the wages of sin is death, but the gift of God is eternal life in Christ Jesus our Lord.

It’s not me saying that. Jesus Christ is saying you are free to choose between death and eternal life.

And however you digest what Israel Folau said, or what I have written, the choice is yours.