Known as “The Creek” because it was bounded by Breakfast Creek which runs into the nearby Brisbane River, it was an all-weather sand track that provided an alternative to the more upmarket grass tracks of Eagle Farm and Doomben. 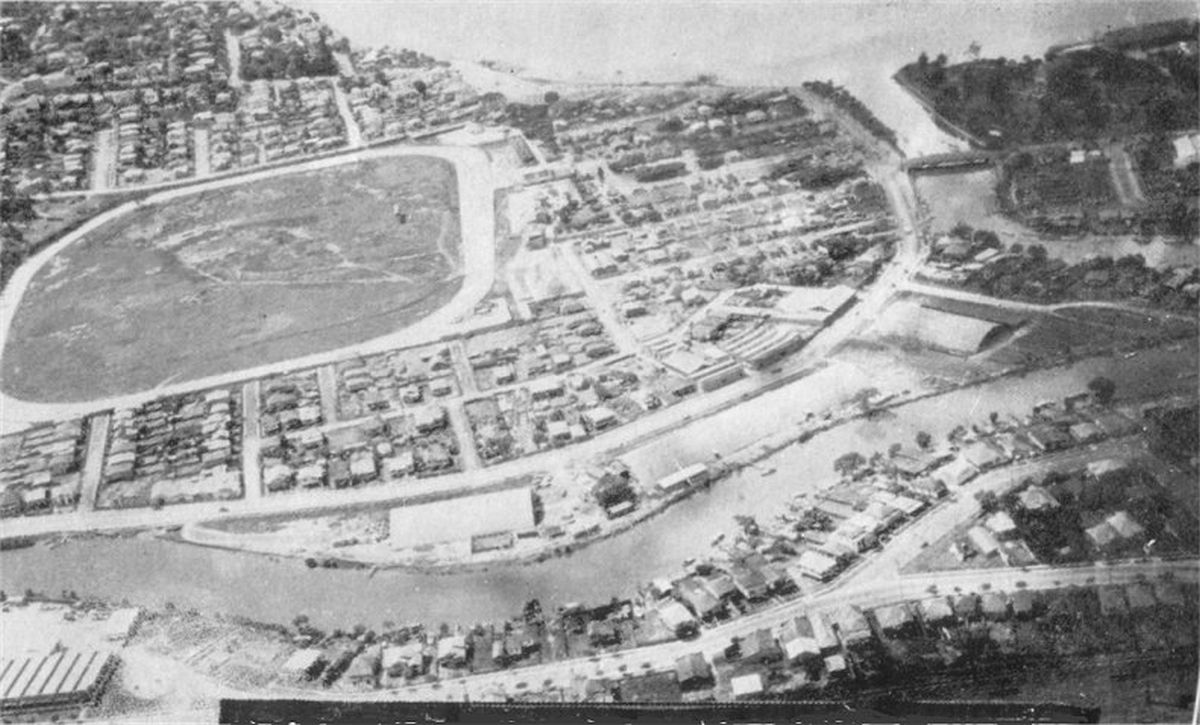 An aerial view (probably 1940s) shows the course is bounded by the Brisbane River (top) and Breakfast Creek (bottom).

This aerial view of Albion Park was taken in 1967.

In hindsight it could be argued that it wasn’t a smart decision to locate a racetrack in such a flood-prone position. Many times since the track was established about 1854, officials had to clean-up after such an event. In a measure of the benefits of a sand track, racing re-started two weeks after the 1974 flood receded.  It took workers several days to remove the silt and debris.

The judge declared this a dead heat between Amble Boy (outside horse) and Royal Glory at Albion Park in May 1931. There was no photo finish camera in that era.

Gallopers such as Recovery, St Aubin, Auction, Lucky Ring, and Red Seas mostly won at Albion Park and were referred to as champion “Creekers”.

Recovery said to be the best of all

Not surprisingly, racing historian Jim McGill rated Recovery as being the best ever and not just because Jim’s father Frank rode the horse. Recovery won twice on the same day first carrying 12 stone (76kg) and then 12st 7lb (80kg).

Racing rules have since changed and horses can’t start in two races on the same day and are not handicapped with such big weights.

In reflecting on Auction’s exploits in 1942, a Sunday Mail columnist referred to Recovery’s weight-carrying efforts at The Creek in 1897. There is also reference in 1896 of Recovery having served some mares before returning to the racetrack. Like some horses he had hoof problems which probably accounts for him racing so well at The Creek in the soft sand. 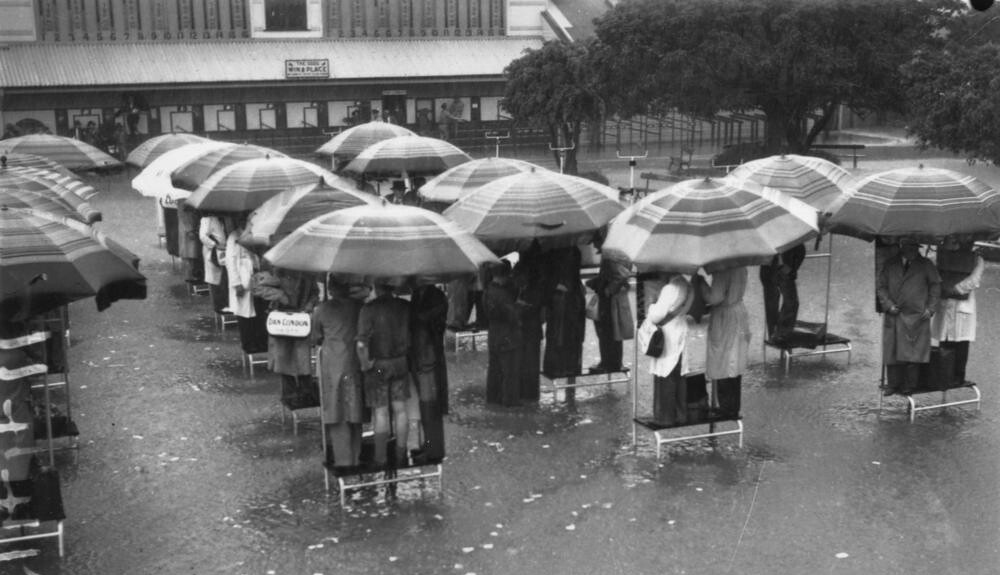 Patrons huddle with waterlogged bookmakers at Albion Park after a huge summer storm in January 1941.

Newspaper records provide great information but not a complete picture of Recovery’s efforts. The same is the case for other horses mentioned.

With the knowledge that Queensland Newspapers maintained a considerable library with files dedicated to particular people and subjects such as horses, it’s possible a file exists dedicated to Albion Park. As a journalist I often researched these files looking for various pieces of information. It would be useful to again visit that library assuming that the contents are still available. 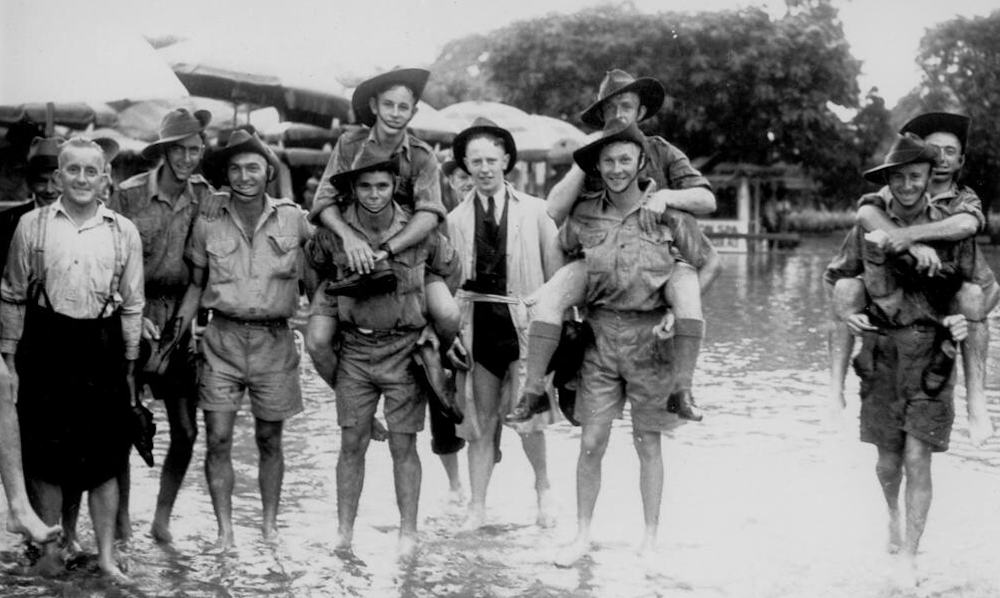 Several servicemen paddle in the water after a storm flooded Albion Park races.

During 1939, St Aubin won several races at Albion Park but his owner-trainer Peter Venaglia eventually said he did not want to race him there because of the big weights he was expected to carry. This became an issue for those horses who dominated at The Creek. That was just part of racing at that time.

The Creek was never going to survive long-term as horse racing expanded. It was the stuff of another era, filled with characters and situations that will be hard for some to comprehend.

As well, harness racing events were included on the program on occasions and those who had standardbred horses back then could not have imagined that one day the location would become a world-class venue for that racing code.

The site is now headquarters to both harness racing and greyhounds and is still known as The Creek, but many would know little of the history behind that title.

Just a short walk from The Creek is the iconic Breakfast Creek Hotel which has long held a reputation as one of Brisbane’s best steakhouses and gathering places.

Wartime was big for The Creek

In World War II, Eagle Farm and Doomben racecourses were taken over by the military, so Albion Park became the city’s main racetrack. Visiting American servicemen in particular flocked to The Creek. 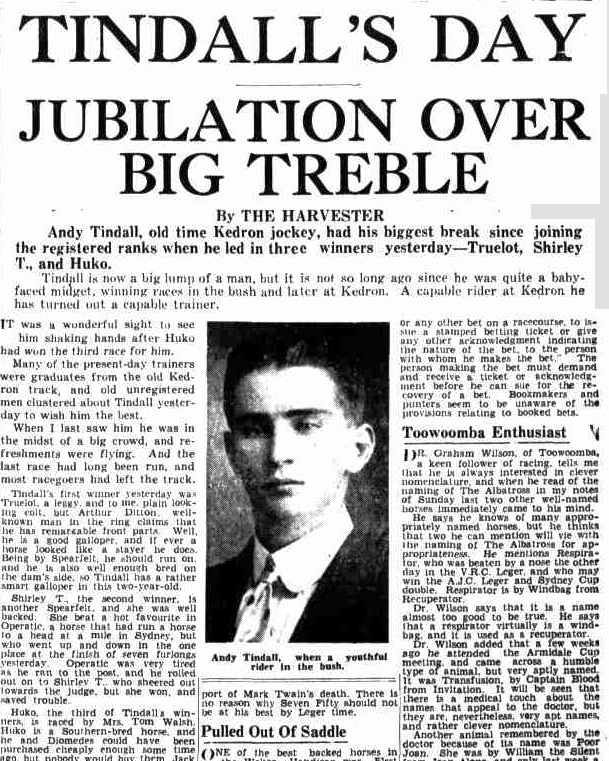 Andy Tindall was an experienced horseman who later became the State’s leading steward.

In many ways Albion Park racecourse could be described as a bush track in the city.  It was inevitable that it became obsolete with time just as other Brisbane tracks such as Deagon and Kedron Park, although Deagon is now a first-class training centre.

When racing said goodbye to Albion Park in 1981, there was trip down memory lane for many who experienced backing a winner at The Creek.

Veteran racing journalist and race caller Keith Noud provided a wonderful insight into what the course meant to jockeys, trainers, owners and patrons. It’s estimated Keith called about 45,000 races in 45 years behind the microphone.

Keith Noud was a laconic, unpretentious individual and certainly did not present the slick television persona we’ve become used to. However, his knowledge and connections helped paint a wonderful picture of what horse racing was like at Albion Park.

Television station Channel 0 (Now 10) covered Albion Park’s last day. The telecast was hosted by Rob Readings with Keith Noud the star of the show because of his quirky personality and interviewing style. Sometimes he interviewed while smoking his pipe; a look many associate with Keith.

Keith Noud had been The Brisbane Telegraph newspaper’s turf editor and I recall him visiting Queensland Newspaper’s Bowen Hills office in the 1980s when I worked on The Courier-Mail.

Keith described Andy Tindall as “Mr Integrity” because of his impeccable record both as a jockey and administrator.  Andy, who rode about 750 winners, was at his peak in the 1940s and competed at Albion Park against champion jockeys such as George Moore and Neville Sellwood. Moore and Sellwood both excelled on the national and international stage.

Jockeys resigned to end of an era

Andy was one of many jockeys who had mixed feelings about the sand track. “I don’t think anyone’s ever liked riding at The Creek; it’s very unpleasant,” Andy told Keith Noud. “It’s something like sitting at a windy beach on a blowy day with all the sand coming back in your face.”

Another leading jockey, Mick Dittman, was a bit more forgiving in his assessment. “It’s a unique track. It’s been very good to me. It teaches riders a few lessons. It’s certainly different to ride here.” 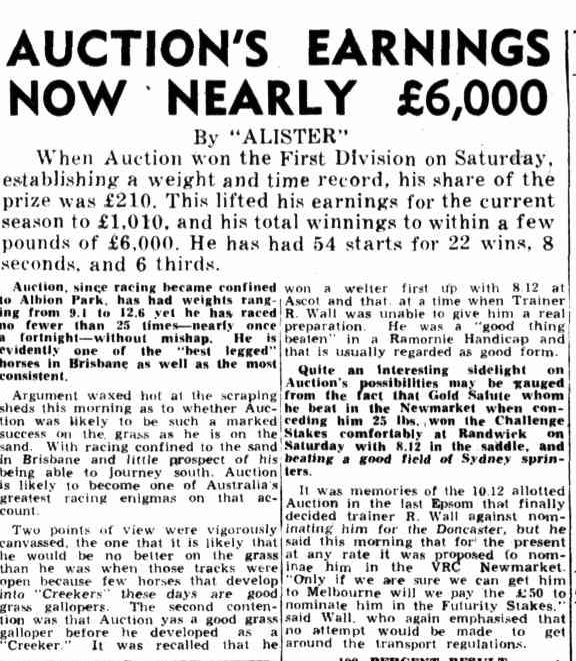 The 1943 article that mentions the exploits of champion Creeker Auction.

Former jockey Ed Tanwan told Keith Noud that riding at The Creek was a “bit savage on the eyes”.  That was in the days before riders were allowed to wear goggles. “It’s sad, but progress is progress,” he said.

Trainer and former jockey Eric Kirwan spoke of his extraordinary experience of riding during a storm in 1939. He said it was raining so heavily that stewards told riders to go straight to the barriers.

The hot favourite romped home lengths ahead of Eric’s horse but weighed in light because the jockey had forgotten his sizable lead bag. Officials had been frantically trying to alert the starter to the problem but, in those days, there was no way of communicating the information. That was changed soon after.

For several decades both as jockeys and trainers, Colin and Pam O’Neill were a highly successful pairing. Pam was a pioneer for women jockeys and Colin had 12 wins at Albion Park on Red Seas among many other achievements. They both rode winners at Rockhampton’s Callaghan Park races on the same day.

Pam did not want to see racing end at The Creek and suggested it would be ideal for night racing. “I like The Creek,” she said. “There’s nothing like The Creek when you’re on a good horse and you make your run and you’re sustaining it.”

Another interesting insight came from a veteran racing man who first visited the track almost 70 years earlier. Bill Ahern, who also a former Brisbane Telegraph turf editor, was barely a teenager when he skipped school to see the Albion Thousand in May 1914.

He decided to bet a shilling that day which was, according to him, a fortune for a young lad to gamble with. Fortunately, he collected on the winner, La Knieve, and turned his one shilling into four shillings.

FOOTNOTE: For myself, I had one visit to Albion Park on Wednesday, 15 September, 1976. It was a profitable day as I backed a long-shot winner named Stars In My Crown who was the son of Lonely Man. Lonely Man raced against Creek champ Red Seas and he shared the same sire (Sunset Hue) as Queensland’s most famous horse, Gunsynd. 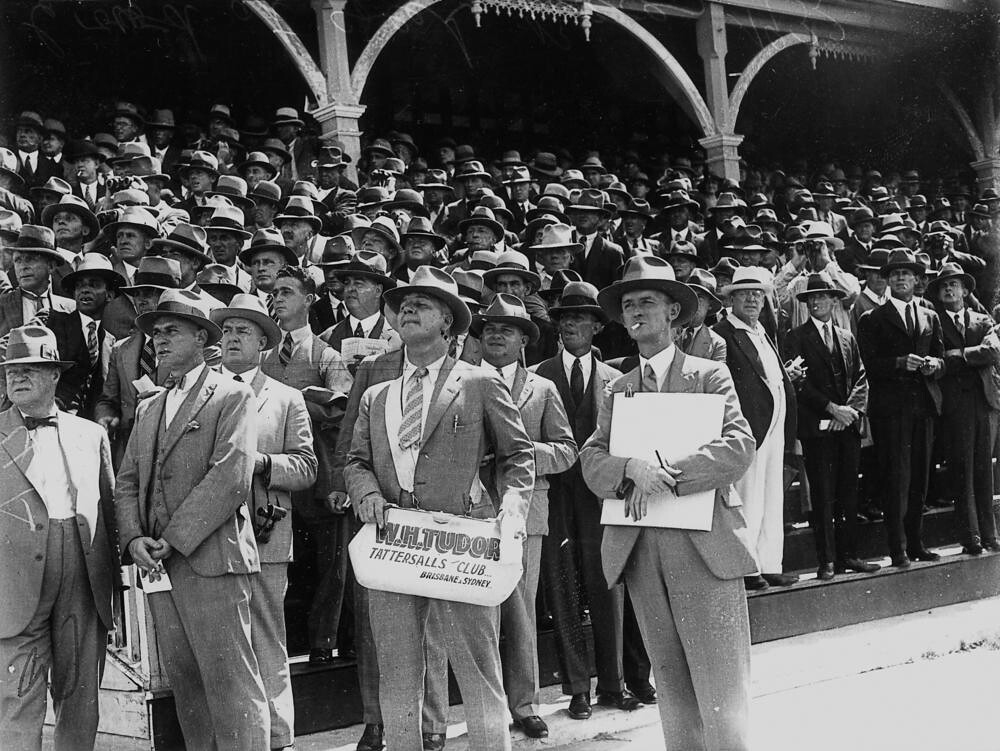 Bookmakers Jack Todd, Mark Fogarty, Joe O’Keefe, Norm Booth, Terry Ahearn, Dan O’Mara and Stan Armstrong are identified in this image taken at Albion Park in 1932. Can you find anyone who isn’t wearing a hat!

The last day at The Creek

For those of you who are really keen on racing nostalgia, here’s the video of the last day at The Creek from which I drew my inspiration for the foregoing.