For several years from the early 1980s, I worked on a casual basis as a photo-finish operator on various racecourses in Central Queensland and South-East Queensland. 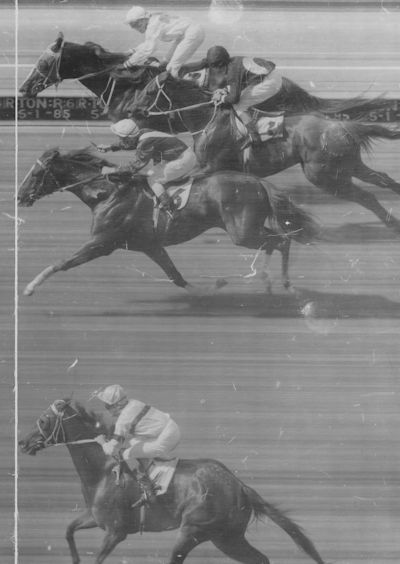 In this finish at Rockhampton on 5 January 1985, the winner is No. 6. As explained elsewhere the string line is superimposed on to the photographic paper and needs to be lined up on the horse’s nose. In this case, this image determines second and third which appears to be a dead-heat. You may have noticed wording on the print under the neck/head of the horse at the top. This is achieved by a motor-operated cylinder fixed below the photo-finish mirror on the racetrack which starts spinning when the photo-finish operator turns on the camera’s motor up in the tower. The location (RTON) stands for Rockhampton. The date and race have to be manually set. Only the race number needs be altered from race to race. 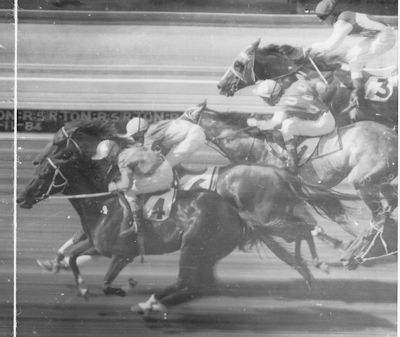 Nowadays digital technology means there is a quick and efficient system by which a race result can be determined within seconds of the horses or dogs passing the finishing post. Before that there was a much more hands-on technique that required skill, concentration and a steely nerve.

Every racetrack has its photo-finish tower but few people understand what happens in that box high above the action.

For many decades from sometime in the 1940s in Australia, photo-finish operators such as myself were busily developing negatives and printing photos as owners, trainers, jockeys, officials and punters awaited the outcome of a race.

There were moments of pressure when a print was required and the most strenuous meetings were at greyhound tracks which often had up to 10 or more races with only a few minutes between each event.

There were occasions when a couple of prints were required that I did not have time to reload the camera for the next race started and, therefore, no negative could be provided.

However, for the majority of the time it was plain sailing, as long as I was organised. When the negative was available it was displayed for judges who made a decision on the race outcome. Sometimes they required a developed print.

This process took around a minute because the film had to be retrieved from the camera, and then developed in open tanks before a negative could be made ready for examination.

The equipment I used consisted of a purpose-built camera with a powerful lens focused on and covering the width of the track; you will notice the finish line at racetracks has a mirror. That gives a mirror image of horses (or greyhounds) on the negative and helps sort out horses in tight finishes.

The system was known as strip photography in that what is captured on the negative is only the sequence of events on that line in the vertical dimension. The term comes from the negative which shows each horse/dog on the same long strip.

Working in the dark

All the cameras I operated (apart from at Doomben in Brisbane) had the large format negative of just over 2.5 ins wide (62mm to be exact). That meant you had to reload the camera for each race. At Doomben, 35mm film was loaded into a canister before the first race, enough to cover each race on the program.

As the horses/dogs approached the finishing line the operator turned on power to the camera’s motor and the negative was drawn through from one spool to the other, thereby exposing images on to the negative.

At Doomben, the difference was that there were no spools to remove but a guillotine sliced the negative which was then removed for the developing process.

Just to the right of the camera was a tray of pre-heated water into which sat three trays (of about 12 ins long by 4 ins wide and 3 ins deep). The first tray had developer; the second was the stop bath and the third, the fixer.

The negative went straight in to the developer and had to be folded from either end and worked through the developer for about 15 seconds before being drawn out through your fingers to remove as much excess as possible before a short dip in the stop bath and then into the fixer using the same hand movements.

When the judges get it wrong

At the Capalaba dogs on 10 December 1988 the result of this race was wrongly posted No.6 first, No.5 second and No.8 third. When the print was put on display, punters pointed out the judges’ error in a most vocal manner. I was busy reloading the camera for the next race and could not understand what all the commotion was about. I soon discovered what happened and the judges quickly overturned the result and No. 5 was declared the rightful winner. While I was an operator this only happened at one other place; Ferguson Park gallops in Gladstone. I don’t remember the details.

It was then, dripping wet, that the now-developed negative was placed on an enlarger mostly within a minute of the last horse/dog passing the finish line.

The judges saw that image displayed on a TV monitor and were then able to make their decision; they rarely called for a print before declaring the result. 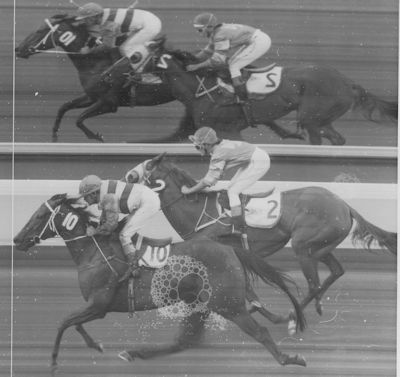 This image is from Kilcoy gallops in March 1990 and is of no significance other than it underscores the nature of working with wet negatives with a bubble showing in the print. Note also the mirror image of the horse shows at top.

When a print was needed, the still-wet negative was placed on another enlarger and the image projected on to a white box below which had a slide-out lid.

It was certainly low-tech when compared with what happens today because under the slide-out lid, the individual sheets of unexposed photographic paper were covered with another thin piece of plastic board.

Before the exposure could be made, the negative had to be positioned so that the nose of the first horse (or whatever placing was being decided) touched the string line which sat above the slide-out lid.

And, yes, it was actually string, positioned vertically and tightly drawn through slots on the photographic paper box.

When that was lined up, the piece of board was removed and the image burnt on to the photographic paper which then went into the developer and fixer.

The still-wet print was then rolled up into a plastic cylinder which was dropped down a tube to the judges’ box below.

Remember that the judges already had viewed the image as the other enlarger was linked to a TV screen and they mostly posted numbers before the print was done.

The enlarger set up at Doomben was a little different because the image was projected through a thick piece of glass into which the line was etched. It was really thin and often hard to line-up the horses’ noses to produce a print in a timely manner.

Because the line was so thin, owners, jockeys, and the punters alike sometimes had a hard time deciphering prints. It became known as “Ed Kelly’s thin line” after the racecourse official who was chief judge at the time. 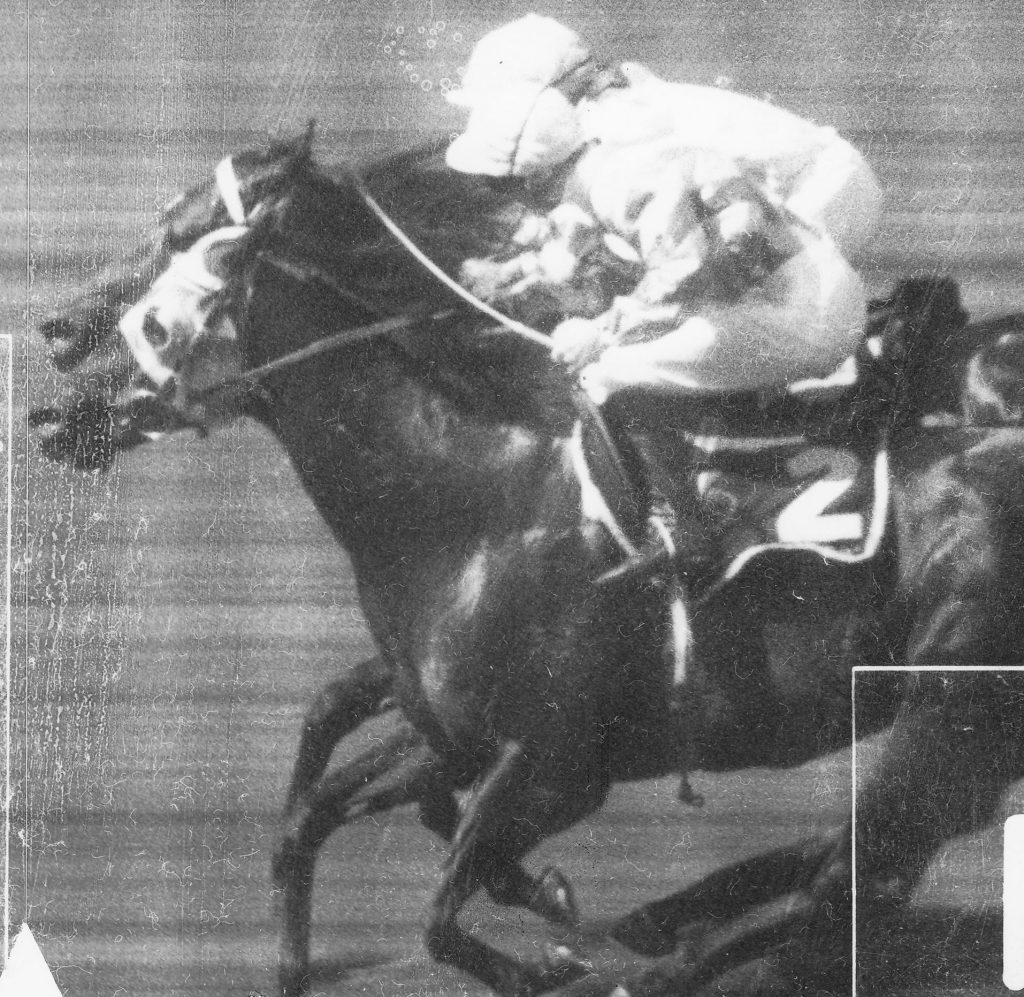 This is a spoil of a print from 9 Jan 1988 at Doomben in which the outside horse (No 2) is the winner. As explained above, the line is so thin, it may be difficult to see on screen.

Most of my photo finish work was at Callaghan Park, Rockhampton (gallops, harness racing and dogs) and I also was at Ferguson Park, Gladstone (gallops), Doomben, Kilcoy, Esk, Gatton (all gallops) along with the Capalaba and Beenleigh greyhounds. At each of those boxes I wrote my name somewhere on the wall, mostly near the camera.

The cameras I operated were owned by Les Hammond who lived in Norman St, Ascot, not far from both Doomben and Eagle Farm racecourses.

A more technical explanation of the concepts of photo-finish equipment I used can be found at http://en.wikipedia.org/wiki/Photo_finish. As well there is an article at Scientific American which gives an interesting history of the technology. Part of it reads:

In 1937 Lorenzo del Riccio developed what is called a “strip camera” that utilized a single vertical slit rather than the traditional horizontal shutter. A sound and color engineer for Paramount Studios in California, del Riccio was able to perfect the device so that the image it produced showed different points in time at a fixed location instead of showing different locations at a fixed point in time. His invention, first used at a horse race at Bing Crosby’s Del Mar Turf Club in California, was later featured in the January 1941 issue of Scientific American.

This is a contact sheet on to which the names of horses have been added so they could be included in the club’s racebook. You will get the idea of strip photography.

This is what a developed negative looks like; hence strip photography. 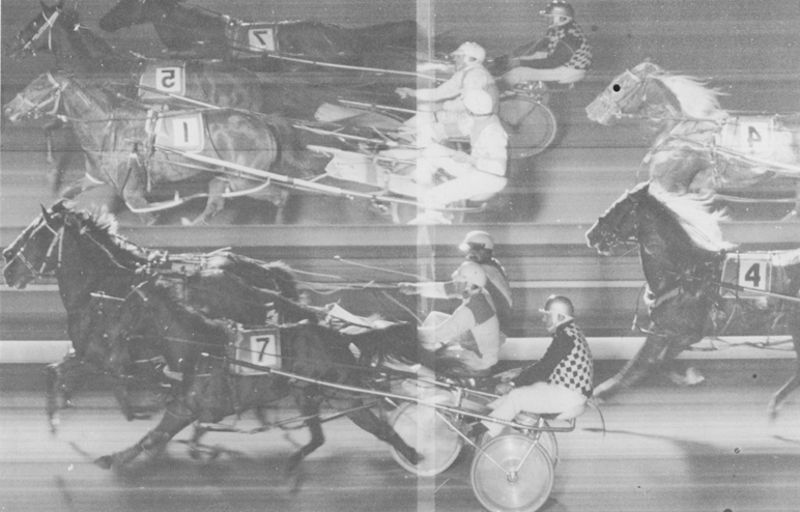 This image shows a dead-heat finish at Callaghan Park Paceway on 6 July 1985. The dead-heaters were No. 1 Penny Creed (driven by Wayne Pearce) and No. 5 The Boy (Paul Zimmerlie), with No.7 Our Nell third and No. 4 Most Regal fourth. There seems to be a surprised look on Wayne Pearce’s face. The judge would have referred to the mirror image to confirm the horse’s number. You will also notice a vertical strip of “light” on the image. This comes from a flash camera used by a third party who produced colour images for private sale. The camera flash bounces back from the photo finish mirror on the inside of the track. 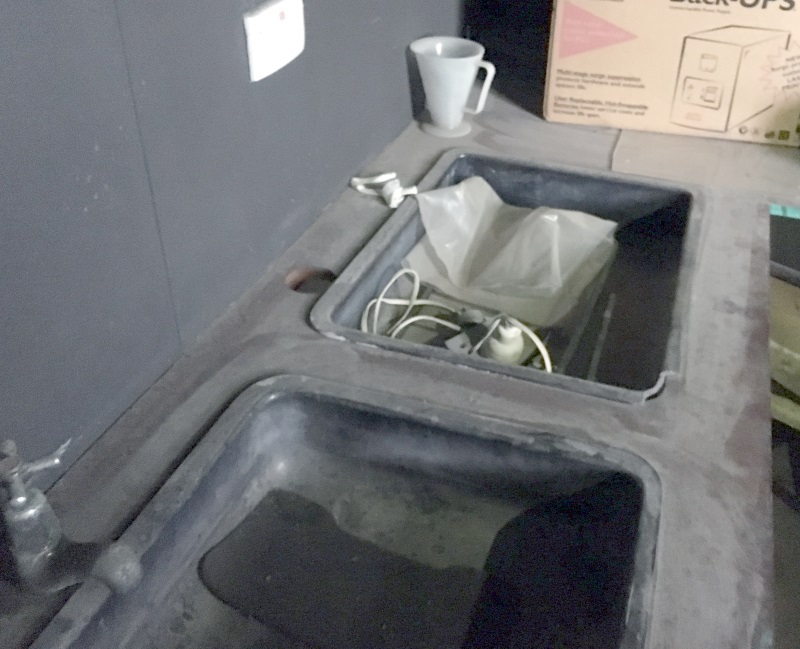 Sinks inside racecourse darkroom. One sink contained a coil which heated water and the chemicals which sat in trays: developer, stop bath and fixer. 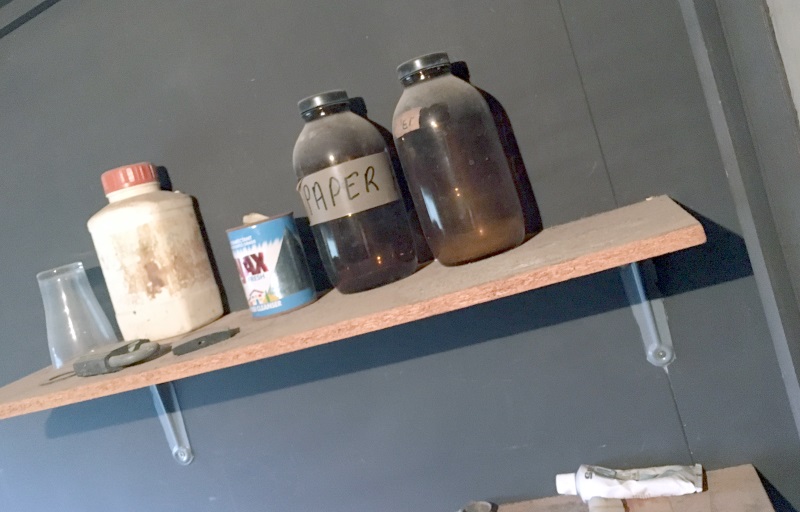