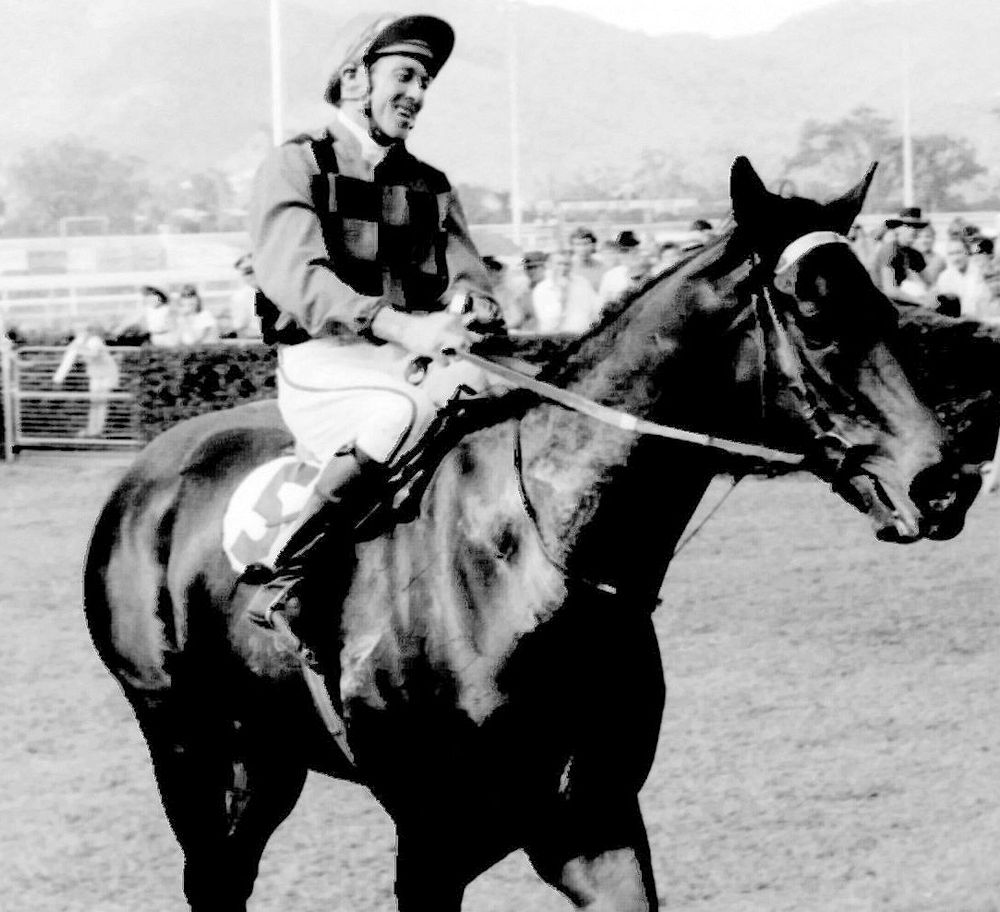 Wally Welburn returns to scale aboard Drive On James after winning the main race at Callaghan Park on 15 September 1984.

When the Rockhampton Jockey Club opened its grass track at Callaghan Park on Saturday, 15 September 1984, I was there with my camera.

Even though I am a journalist and words are what I do best, I had more than a passing interest in photography.

Although I was The Morning Bulletin‘s racing writer for a handful of years from 1973, I  left the paper in 1983 and worked as a journalist at the Capricornia Electricity Board before joining The Courier-Mail newspaper in 1986.

During my newspaper hiatus, I worked part-time work at the Bulletin as well as for The Sunday Mail newspaper.

On top of that, I also worked casually as one of the official photo-finish operators at Callaghan Park gallops, harness racing and greyhounds. If you’re interested, I written about that as well.

As I recall I took photos for The Sunday Mail‘s coverage of the grass track opening.

Callaghan Park’s old dirt track proved the undoing of many visiting horses and I believe most in the industry were pleased with the new surface.

I have a copy of the racebook from that day which helps identify horses, jockeys, trainers, and other officials.

With the help of local knowledge, particularly from the family members in the racing fraternity, I’ve been add other names as well.

It would be great if you could leave a comment at the end of this yarn. 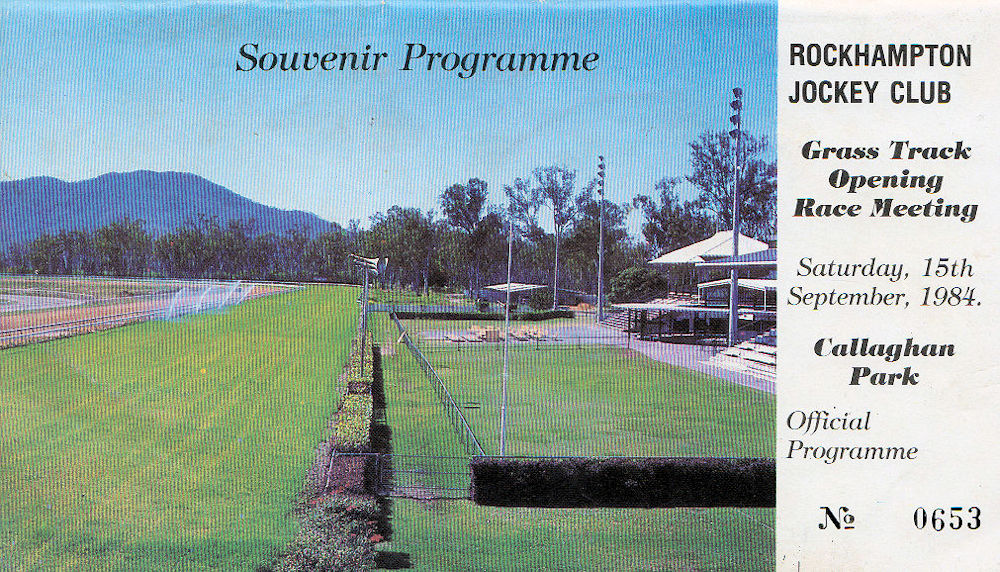 Racebook front cover from 15 September 1984 when the grass track was opened at Callaghan Park.

Drive On James and Tanzada had filled the placings behind Golf Field two weeks earlier. Golf Field was highly favoured to win again but finished 10th in the 16-horse field. 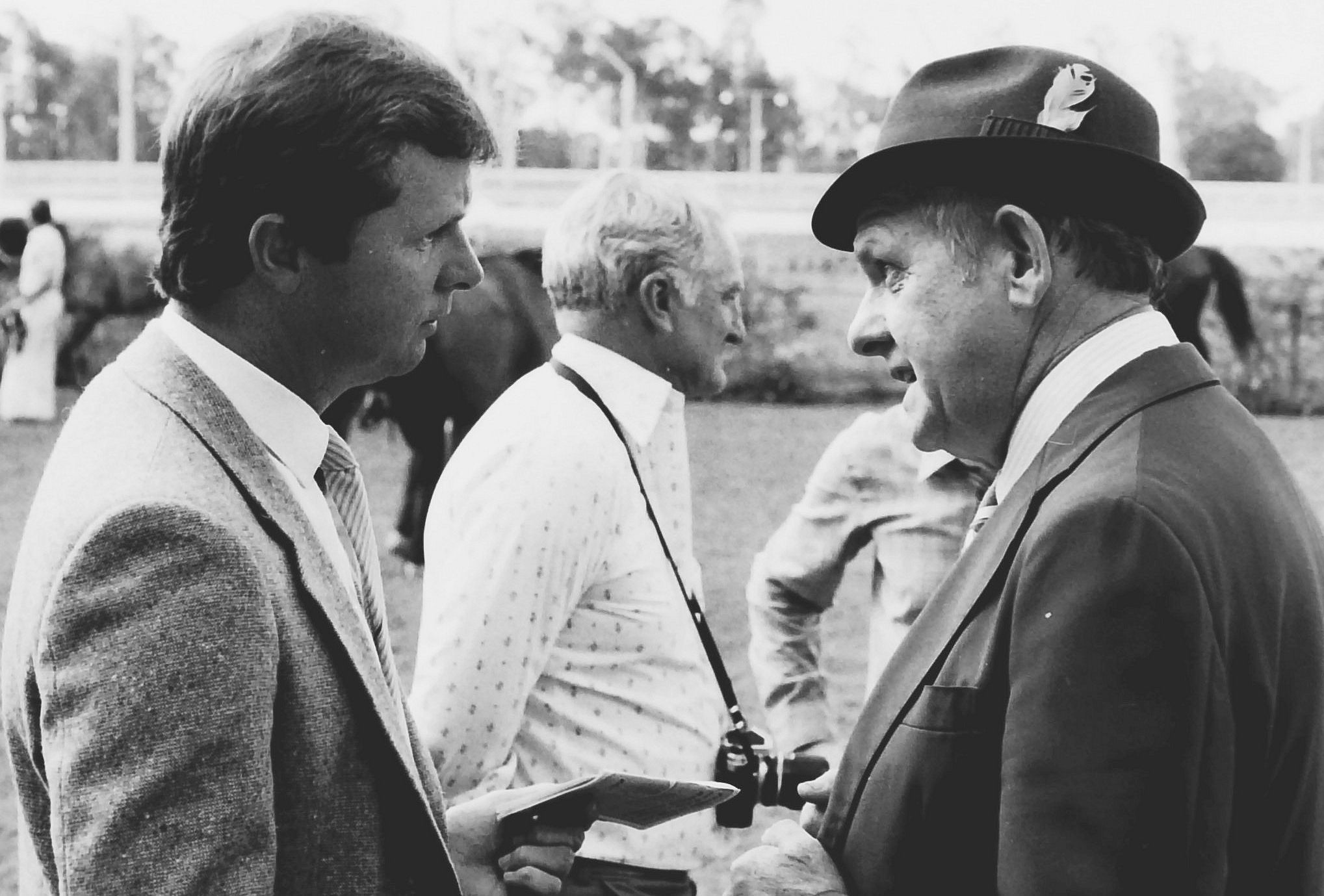 In revisiting my negatives, I noticed that I’d taken a picture of Racing Minister Russ Hinze watching proceedings.

I recognise Bob Meldrum at right with his hand shading his eyes, and I believe the man obscured with his hand on the rail near Russ Hinze to be RJC committeeman Colin Gabel. And, it’s possible that’s Colin Lisle standing behind Russ Hinze. 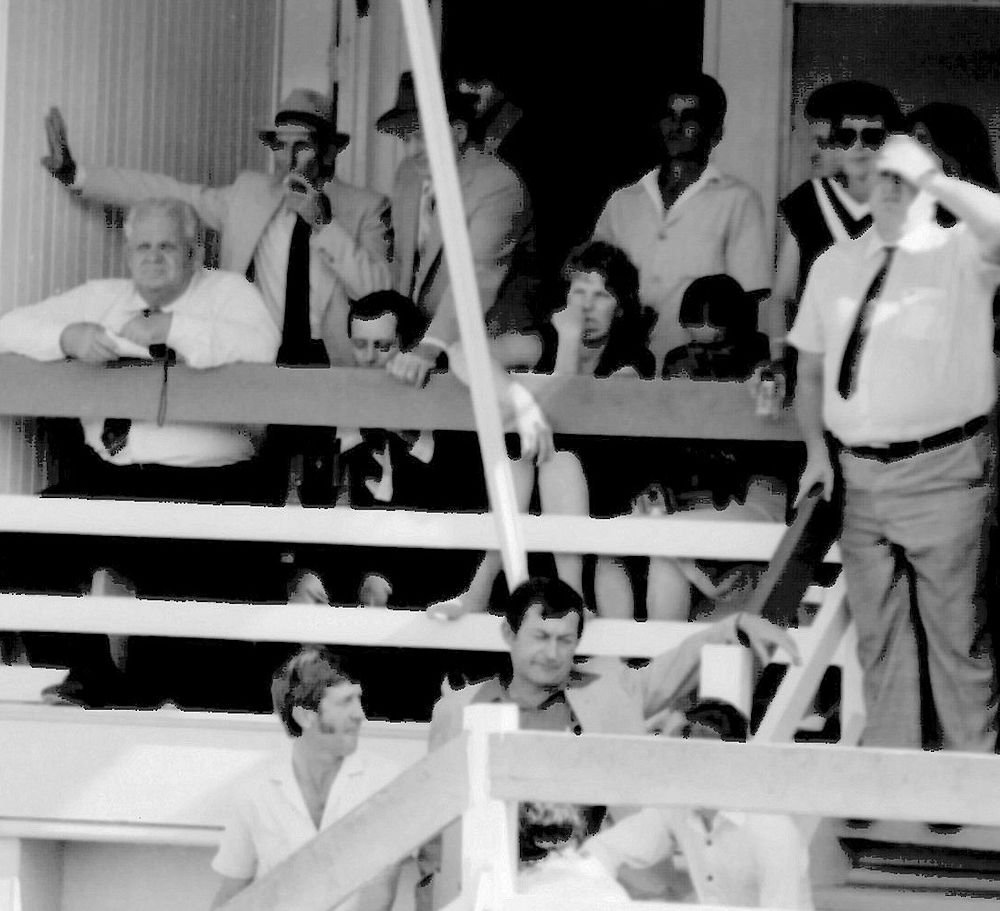 At left is Racing Minister Russ Hinze at Callaghan Park on 15 September 1984. I believe that is Bob Meldrum standing right. And the fellow with his hand draped over the railing near Bob Meldrum, appears to be Ken Russell’s brother Bill. 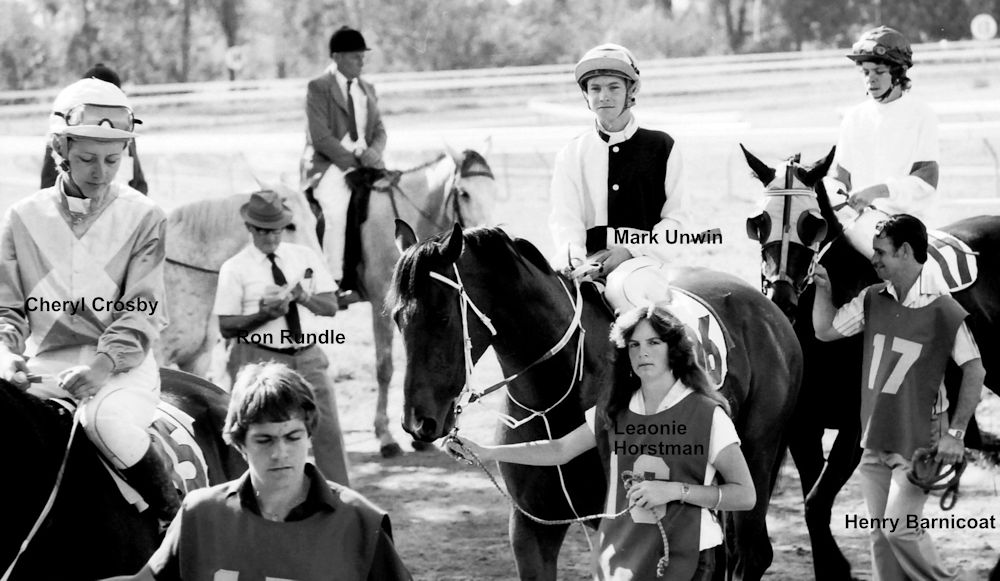 Callaghan Park grass track opening day 15 September 1984. Three of the starters in the main race the Russ Hinze Open Handicap (1200m). That’s Leaonie Horstman leading Golf Field (No 16, ridden by Mark Unwin) which was trained by her grandfather Col Lisle.  No 15 was Roving Romeo (racebook shows that colours were blue, white crossbelts & cap). Trained by Robin Hartwig from Wondai, the jockey is Cheryl Crosby, but the strapper is unidentified. No 17 was Koodoo (colours white, purple armbands & cap) trained by Malcolm Raabe of Murgon. No jockey’s name in book, but the strapper is Henry Barnicoat.  Golf Field ran 10th, actually finishing behind Koodoo (9th) and Roving Romeo (8th). I believe the steward in the background to be Ron Rundle. See below for page from racebook that gives details about each horse.

Some will recall that Robin Hartwig’s horse Ormiston twice ran second in the Rockhampton Cup (1983 and 1984). Cheryl Crosby (now Dennien), who was Hartwig’s apprentice and who often rode Ormiston, recalled those times in 2019 after Robin passed away.

Of him, Cheryl said: “Robin really taught me how to have a clock in my head and judge pace. The timing developed through practice while riding trackwork.”

Hartwig wasn’t afraid to take his horses around the State as can be seen from Roving Romeo’s form in 1984. He’d won at Townsville over 1000m in June, and then back home in Wondai on 4 August over 1200m. He then had a trip to Eagle Farm where he ran fourth over 1200m.

Golf Field No 16 in main race 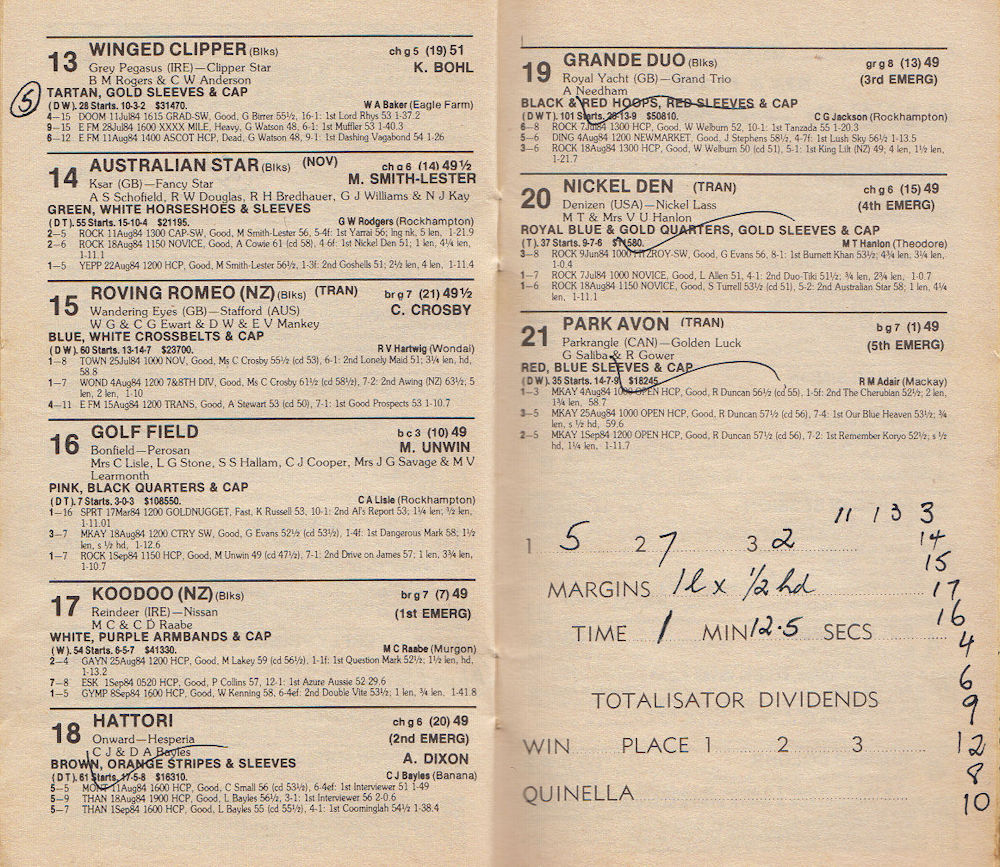 Racebook page that gives details about Golf Field which ran 10th in the Russ Hinze Open Handicap. Note the description of the jockey’s colours correlate to the above image.

Wally Welburn on Big Shamus at Callaghan Park September 1984. The other two horses pictured are No 10 and No 8, based on the fact that the person leading the horse at left is trainer Kev Fisher. Big Shamus had the No. 5 saddlecloth in race three but wore club colours and not the silks described in the racebook. Even though it’s a black and white image, the colours listed for No 8 Secret Hunter (with Viv Welburn onboard) match the description of  green, tangerine V and cap. The colours match for No 10, Prince Lorenz, is more certain as they were listed as white, green stars and red cap. He was trained by B.D.Keenan from Yeppoon. 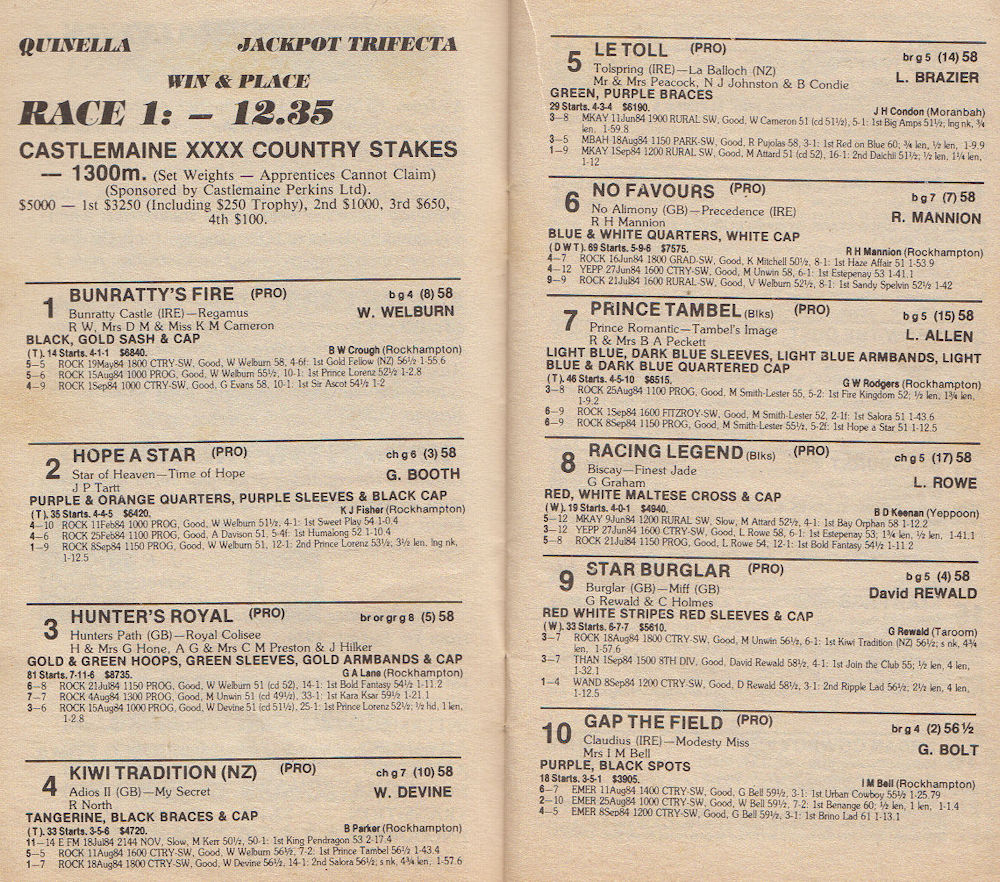 Some of the runners in the first-ever event held on Callaghan Park’s grass track 15 September 1984. The winner was Le Toll ridden by Lloyd Brazier and trained by Richie Mannion. 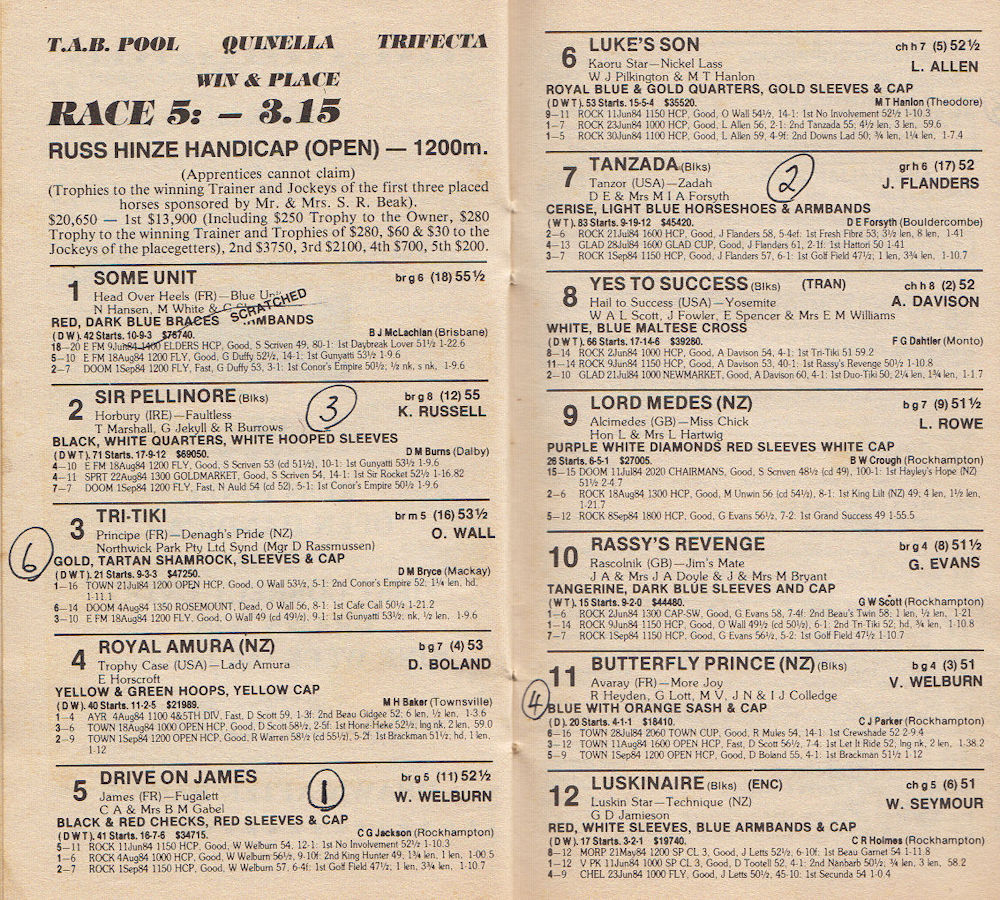 Racebook page for Russ Hinze Open Handicap (1200m) at Callaghan Park on 15 Sep 1984 that was won by Drive On James.