Ted did it the hard way

ROCKHAMPTON. —E.R. (Ted) Price looked over the Kenrick Tucker Velodrome and imagined how it might have been for him to have raced on such a surface in his heyday. But Ted rode in a different era on dust, bitumen and boards. He raced professionally for 28 years, retiring at 40. 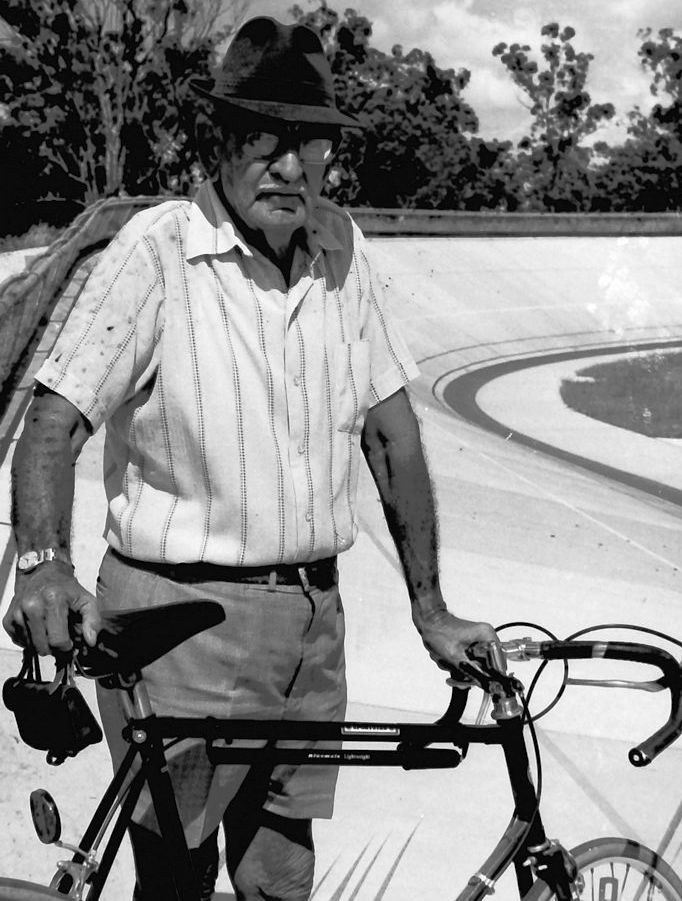 Ted Price at the Kenrick Tucker velodrome in Rockhampton.

Now 71 (Note that since this article was written that Ted has passed away), Ted still rides to keep himself fit and relives those halcyon days of the 1920s when racing of all types took place at the Rockhampton Showground. As well as bike racing there was foot races, goat races, trotting and motorbikes.

“They used to race every Tuesday night and every night during carnival week. Bookmakers used to bet on everything,” he said.

Ted started out professional bike riding when he was 12. In 1928, aged 16, he had a successful carnival winning the half mile, mile and two mile championships as well as the one mile handicap. He virtually cleaned up the program and remembers taking away between £50 and £60 in prizemoney.

When the Moore Government came to power in 1929, bookmaking on cycling and other events was outlawed in Queensland, and the Tuesday night programs at the Showground ended. Ted had to travel the state for competition and in 1937, he recalls, he made 17 trips to Bundaberg and five to Maryborough, all by train.

His major wins in those years were the five mile Labor Day championship at Maryborough in 1935 and the three mile Coronation Celebrations professional championship in Rockhampton in 1937. In 1938, Ted decided to move interstate for the board track racing of Sydney.

Easter Monday, 1938, is a day which will always stick in his memory. At Bombala, he won the half mile, one mile and the big money two mile. “I won £65 for three races that day and I thought I was a millionaire,” he recalled.

Ted believes he set a record that will be hard to beat, by winning the Albury half mile Lightning Handicap from 1938 to 1940, the last year off a 35yd mark.

During his time in Sydney, Ted raced and trained with the best, including Sir Hubert Opperman, Bill Guyat, Herb Guyat and Bill Moritz. Promoter Rufe Naylor kept up the competition for the Australian riders by importing German, Italian, French, Dutch and Belgium competitors over the years.

On a trip to Tasmania, Ted put up a sterling performance for second place in the Burnie wheel race. “I was one out against all the other teams as there weren’t many Queenslanders, so it was only the teamwork that beat me in the end.”

During his five-year stint away from Queensland, Ted rode in all the eastern states and was comparatively accident free apart from breaking two ribs in a fall at Griffith.

When he came back to Queensland, Ted took out a bookmaker’s licence and worked around Brisbane before coming back to Rockhampton later that year. He started commuting to Brisbane, fielding at the midweek races and then at Rockhampton on Saturdays.

“In 1950 when I bought my first Holden, we would drive down on a Tuesday and come back on Thursday. But before that I made 43 trips in a DC3,” he said.

He recalls being at Beaudesert races one day when 108 bookmakers were fielding. “That was just after the war and place betting was all the rage.” After 37 years, Ted says things haven’t got any easier for the bookmaker. “You still have to do your homework.”

Ted has raced several gallopers over the years and had success in 1964 when New Surprise won the Rockhampton Newmarket.

Racing had always been in his blood and just after he returned to Rockhampton, Ted tried to revive the racing programs at the Showground venue. Billed as the electric light sports, the meetings included cycling, motor bikes and foot races – but after three nights the venture folded.

But about 10 years later, in 1958, Ted was back promoting motorbike, foot and TQ racing at the Showground. Support grew and two Australian championships for Speedway bikes were held at the Showground, the only ones ever held outside the metropolitan area, according to Ted.

Ted worked closely with Brisbane Exhibition speedway promoter, the late Frank Arthur, and brought the English and Australian Test teams to race in Rockhampton. Ted extended his association with speedway, helping to establish it in Mackay and Townsville. But because meetings were being held every fortnight in Rockhampton, he decided to concentrate his efforts there.

In 1973, Ted organised the construction of a safety fence at the showground and introduced sedan car events to the city. They became a big success and although Ted stopped promoting the meetings about five years ago, they are still popular.

Ted also looks over the Kenrick Tucker velodrome these days and imagines how he could have promoted professional racing on such a circuit. But he is content, he says, with those memories of ploughing through the dirt to many victories at the Showground.

UPDATE February 2016: I have started a National Library list which provides links to events in which Ted Price was involved.