Struck down by the lurgi

The Goons and their legacy

HAVE you ever wondered what people are talking  about when they say they are suffering from the dreaded lurgi?

Perhaps most use the term because they heard it from a family member. The fact that it came from The Goon Show, a radio comedy that was to change the face of humor, may surprise some people.

The Goons were a hit in the 50s and 60s in England and Australia and, at the height of their popularity, millions world-wide hung on every catchword, silly phrase, nonsensical song, weird sound effect and tried out the voices of their favorite characters.

For youngsters their sayings were “ying-tong-iddle-i-po”, “needle-nar-dle-noo”, “yuckabakaka” or “hern, hern”. Not “cowabunga, dudes” or “cool”.

They had an adventure world into which they escaped each week where their heroes climbed underwater mountains, battled mysterious plagues like lurgi, spon or nadger, solved the mystery of the Marie Celeste and fought such fiends as the dreaded batter-pudding hurler.

The antics of Donatello and his sewer-dwelling sidekicks pale into insignificance by comparison. 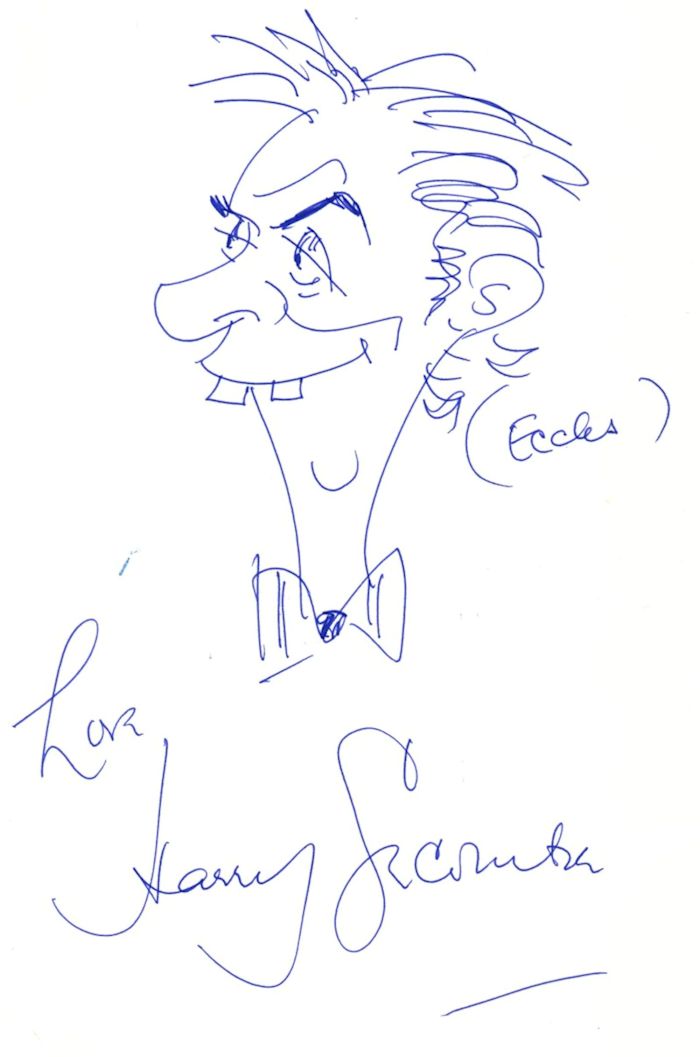 How Harry Secombe drew Eccles for me.

The Goons brought a whole new dimension to radio and their humor stretched the imagination of their listeners.

Fans have bought millions of Goon Show recordings, scripts and literature over the years.

Even in the early 70s, 16 years after The Goons first recorded the zany Ying Tong Song which sold 280,000 copies at its first release, it was back in the BBC Top 20.

Peter Sellers, Harry Secombe and Spike Milligan will go down in history as the men who helped most of the English-speaking world learn to laugh again after the war.

Milligan, The Goons’ creator, has been described as a verbal anarchist who has never made his peace with society, or himself.

On a visit to Rockhampton several years ago, the city’s long-serving mayor, Rex Pilbeam, welcomed Milligan with a comment that he had “always admired you British”.  Milligan’s retort: “Well I’m Irish and we bomb the bastards.’’

The Goons’ popularity is still evident today in Australia. Radio National broadcasts repeats of shows at noon on Saturdays and Goon recordings and literature are in constant demand at libraries.

The Goons relied on some very obvious and repetitive occurrences to introduce some of their characters. There then followed the inevitable explosion that would bring a Bluebottle cry: “You rotten swines, you have deaded me!”

A Milligan character, Little Jim, who had an almost unintelligible baby’s voice, reacted to contrived splashes with: “He’s fallen in the water.”

The Goons were a product of the times and came about during the golden era of radio, a medium which owes so much to the BBC.

BUT The Goons can’t be summed up simply; they are more than Sellers, Secombe and Milligan and the myriad characters they brought to life. Milligan once described the show by saying the listener went into a dream world where all things Goon made sense.

In this world, the rigid dimension of time and space and the link between them need no longer confine the listener to logic. Anything can happen and usually does.

Such was the popularity of The Goons that it spilled over to the hit parade through nonsensical songs such as Ying Tong Song. Others included I’m Walking Backwards for Christmas and The Raspberry Song.

The Goons even made their way into television as the Telegoons with the characters as puppets and scripts re-worked from the radio shows.

Goon humor is essentially British and probably the most celebrated enthusiasts are the royals, especially Prince Charles.

Prince Philip, Princess Anne, Princess Margaret and Lord Snowdon were on hand in 1972 to help The Goons mark the 50th anniversary celebrations of the BBC with a special show.

Afterwards Elton remarked in a Bluebottle voice: “I boughted dem because I love dem.”

The success of The Goons came about primarily through Milligan’s surrealistic humor but could not have existed without the influence and input of many others including Michael Bentine, an original, who left the show at the end of the second series in July 1952.

Milligan, ever the clown from an early age and a keen jazz-playing musician, fashioned his humor during his war service.

In his book Adolf Hitler—My Part in His Downfall, Milligan relates what he said were the “first dim adumbrations of The Goon Show”.

He said that when on duty he and army mate Harry Edgington would write material and gave an example, part of which went: The door flew open and in crashed the master-spy himself. Gruenthaphartz,  measuring five rounds gunfire by inches three and clad only in a huge fur coat of huge fur, a sou’wester and two hand-painted barges strapped to his feet for a quick getaway.”

The grounding in show business that The Goons got during the war years came in army-organised concerts for Milligan and Secombe. The air force provided Sellers with an outlet for his exploits—his most daring being the impersonation of officers.

This helped mould the brand of humor that was to become so lasting.

The Goon name was adopted by Milligan from a Popeye comic strip which depicted a Goon as a creature speaking in scribbles.

Alexander Walker, in his biography on Peter Sellers described that first Goon show:

“This is the BBC Home service,” were the introductory words which listeners heard in the very first broadcast on Monday, 28 May 1951.

There followed a cacophony of off-key musical instruments and Milligan’s “raspberry” blown at an organisation which he was always to consider more tormentor than mentor. When the sound died down the announcer asked,” What is the zaniest comedy show on air today?”

Sounding as if his voice had been buried in a graveyard crypt along with his corpse, Milligan ventured a guess: “Er, Today in Parliament?” “No,” cried the announcer, his voice throbbing with a  confidence shared by very few at the time, “it’s those crazy people, The Goons.”

So, The Goons were away.

Twelve months later when The Goons were to make their first television appearance, a reviewer started off his article with the statement:

“Perhaps they will click; perhaps not. But if they do, it will be a new milestone in the history of true ‘crazy’ comedy. And there is a strong body of opinion which forecasts that they will.”

Sellers’ mimicry is legendary from his outrageous impersonations of officers during the war and this talent led to a similar ruse to gain him an audition with the BBC.

Walker best described that mimicry in his book:

“Sellers began developing a range of voices to fill in Milligan’s characters, the way he himself used mimicry to color his personality. He based them on boyhood memories, war-time encounters and radio favorites.

“His Major Bloodnok was described as the voice of the Raj he had heard all around him in India infused by Milligan’s hatred for the hangover of the Empire; Bluebottle was a reedy-voiced school swot; Grytpype was a take-off of suede-voiced George Sanders; Henry Crun fluted like the inventor-cum-magician in the children’s hour serial and Milligan’s Eccles was reminiscent of ventriloquist Edgar Bergen’s country yokel dummy Mortimer Snerd.

“But all of them were distorted through the mouthpieces of their animators till they appeared as totally independent beings.”

Ten series of The Goon Show went to air, the last in 1959/60. The last of that series was The Last Smoking Seagoon on January 28, 1960, although the cast did get together again in 1972 for the BBC’s jubilee celebration to perform The Last Goon Show of All.

So where and how did The Goons start? In a pub, where else? The pub was run by an ex-army major, Jimmy Grafton, himself a radio scriptwriter.

The pub was a meeting place for performers of the day as England was rebuilding after World War II. Gradually a liaison began with Grafton, Bentine, Sellers, Secombe and Milligan and another scriptwriter, Larry Stephen.

Secombe wrote in his book Arias and Raspberries:

“It was always a relief to get away from the theatre and join in the revels at Grafton’s on a Sunday night. Spike, Peter and Mike and I were fast developing a team spirit and enjoyed bouncing ideas off each other. All the time Jimmy Grafton watched approvingly, sometimes curbing our excesses with a constructive suggestion….”

Eventually, the BBC decided to air a series of this emerging brand of humor and The Goons were born.

“The pressure and the tension of keeping up the standard drove me mad. I dedicated my whole life to it, seven days a week. I used to get up, get to the BBC before 9, work right through the days and evenings …

“It cost blood to put that show on for me. Sheer agony. It wrecked my first marriage and it wrecked my health.

“My nervous breakdown happened while I was on the show and I’ve been neurotic ever since. So you can say I gave my sanity to that show.”

What a tragedy that a man suffered so much yet his labors brought untold joy to millions.

The popularity of The Goons is, seemingly, everlasting. Sellers died in 1980 an immensely popular actor/comedian and both Milligan and Secombe have enjoyed successful careers in entertainment.

A measure of the influence the show had on the trio can be gauged by an excerpt from a letter which Sellers wrote to his wife, Lynne Frederick, a couple of years before his death.

“Fifty years is a very long time and I seem to have wasted most of them, apart from those happy Goon Show days.

“If I had met you then, how difference it all would have been.

“Only you know that, basically, I am really Bluebottle and nothing else.”

Also, in one of his last interviews, Sellers said:  “I am proud to have been a Goon. I would like to be remembered for that.”