Rich Parisian lived in poverty to provide for others

A 19th century Parisian named Nicolas Simonin-Lalleman, who amassed a considerable fortune, lived in abject poverty so that he could help others.

More than 160 years ago, a few lines in a newspaper article reveal an extraordinary individual who gave sacrificially so that others could have a comfortable and dignified end to their lives.

As well, he provided food and clothing for those who had little.

I happened upon an 1856 newspaper report that gave an outline of his life and selfless generosity.

With the help of friends Christian Souilijaert and Reginé Molloff, I was able to establish more details of Simonin’s life and the way in which he was honoured.

But first the newspaper clipping and transcription: 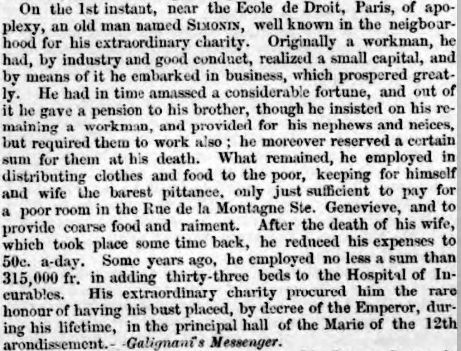 Transcript of above follows:

Aberdeen Herald and General Advertiser 13 December 1856, p5.
On the 1st instant, near Ecole de Droit, Paris, of apoplexy, an old man named SIMONIN, well known in the neighbourhood for his extraordinary charity.
Originally a workman, he had, by industry and good conduct, realized a small capital, and by means of it he embarked in business, which prospered greatly.
He had in time amassed a considerable fortune, and out of it he gave a pension to his brother, though he insisted on his remaining a workman, and provided for his nephews and nieces, but required them to work also; he moreover reserved a certain sum for them at his death.
What remained, he employed in distributing clothes and food to the poor, keeping for himself and wife the barest pittance, only just sufficient to pay for a poor room in the Rue de la Montagne Ste. Genevieve, and to provide coarse food and rainment.
After the death of his wife, which took place some time back, he reduced his expenses to 50c. a-day. Some years ago, he employed no less a sum than 315,000 fr. in adding thirty-three beds to the Hospital of Incurables.
His extraordinary charity procured him the rare honour of having his bust placed, by decree of the Emperor, during his lifetime in the principal hall of the Marie of the 12th arrondissement.–Galignani’s Messenger.

What did we find out about Simonin? 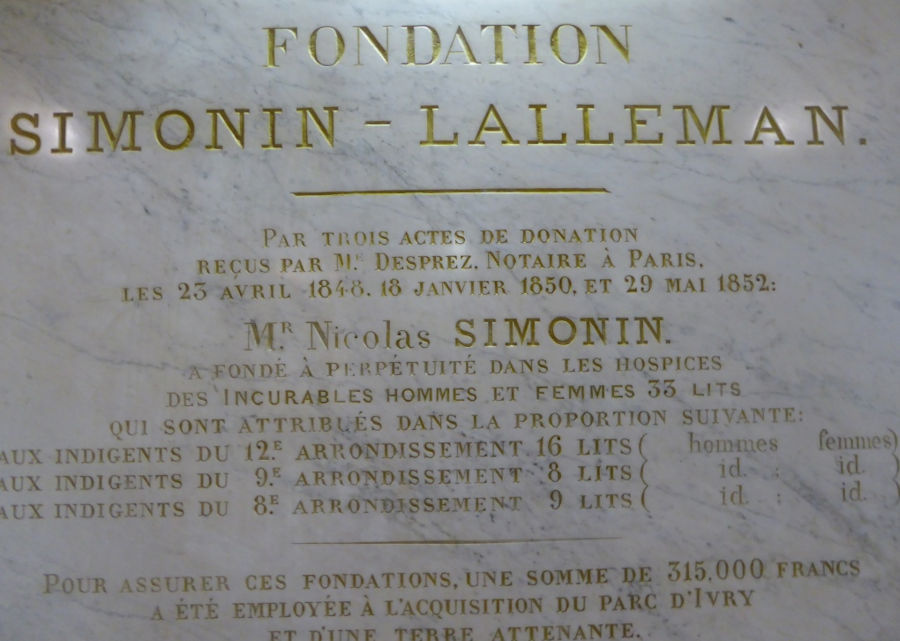 Some of the wording on an engraved marble plaque erected to honour Nicolas Simonin-Lalleman at the council chambers in the 5th arrondisement, Paris. Image courtesy of Christian Souilijaert and Reginé Molloff.

According to my Paris friends Chris and Reginé, the fact that the Simonin plaque was placed in the 5th arrondissement is a sign of the high esteem in which he was held.

That’s because the council chambers are next  to the Panthéon building where many of France’s highly respected sons and daughters have been interred.

The wording on the Simonin plaque matches what was written about him in the newspaper article as well as in a book called At Home in Paris by William Blanchard Jerrold.

This is the extract from Jerrold’s book:

M. Simonin Lalleman has founded thirty-three beds in the Hospitals for Incurables, to which he reserves to himself the right of nomination. Fourteen of these beds become, after a certain delay, the property of the Bureau of the 12th arrondissement. 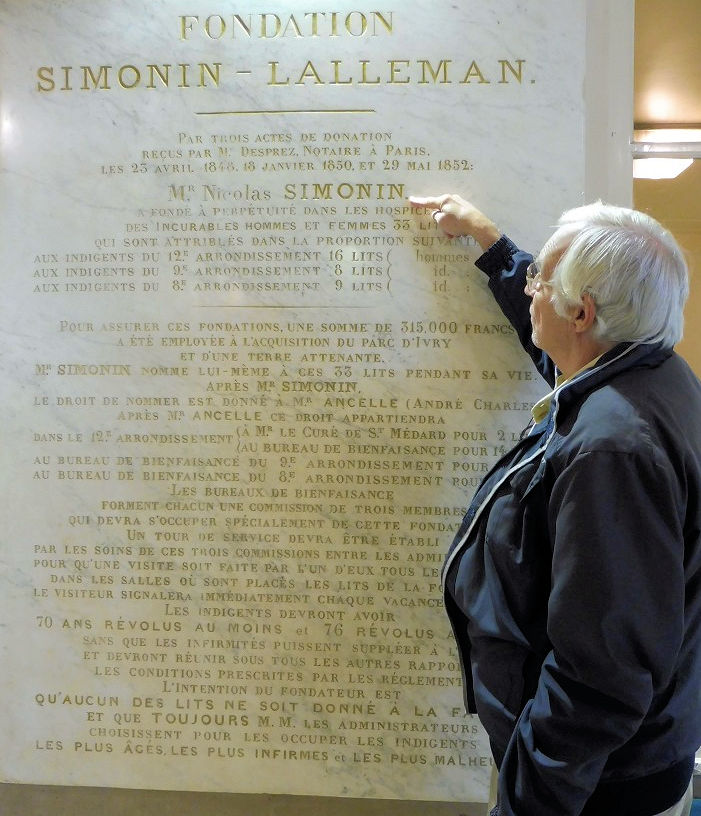 M. Souilijaert next to the Simonin Plaque at the council chambers in the 5th arrondisement, Paris. The plaque gives details of how people could benefit from Simonin’s generosity. Image courtesy of Christian Souilijaert and Reginé Molloff

Simonin lived a simple life, provided for family members … but made them work for it … and obviously never forgot his humble upbringing.

Because Simonin pledged most of the hospital beds to people in the 12th arrondissement (as well as the 8th and 9th) explains why a bust was made of him. But Chris and Reginé could not find the bust at that location.

This is a marvellous example of philantrophy, but perhaps the French term largesse fits better for Nicolas Simonin-Lalleman.