Ken Russell, an all-round champion, and other CQ racing identities 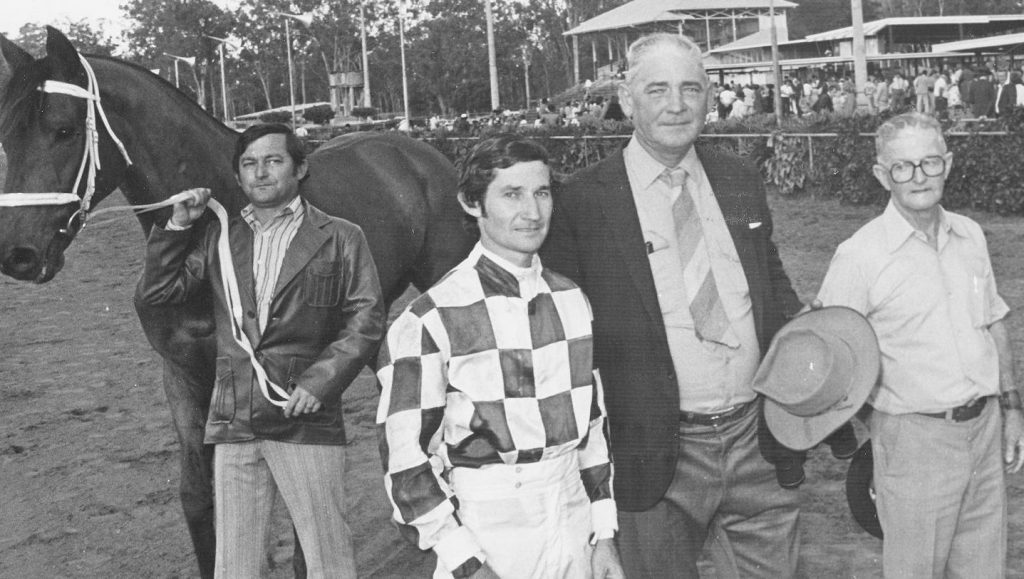 Ken Russell at Callaghan Park in 1980 when he rode Panard to win the Rockhampton Cup. His dad, Gordon, far right, trained the horse and Ken’s brother Bill is holding the horse. The man with hat in hand is Panard’s owner Noel Howard.

The late Ken Russell is fondly remembered by racing people all over Australia and particularly in Central Queensland.

Ken grew up in Monto and developed his silky skills on bush tracks before graduating to the Gold Coast and Sydney.

He died in a racetrack accident in 1993 aged just 42 and will be remembered as one of the best at his craft. He won more than 1800 races and more than a dozen times was the No 1 jockey where he was based, whether at Callaghan Park or the Gold Coast.

In his early days he was a Callaghan Park regular and, of course, rode Rockhampton two-year-old Golf Field to win the 1984 Golden Nugget (now the Magic Millions) at the Gold Coast.

Callaghan Park racebook from 15 September 1983 when Golf Field started but was unplaced.

As as journalist, he was a dream to work with. Always answered my calls and was always ready to talk about anything.

I last spoke to Ken around 1988 when I saw him by chance in Brisbane when he was with a group of jockeys. I called him the next day and we chatted about Callaghan Park days and bush racing.

I have a clipping from the St Patrick’s Day meeting at Wowan in 1976 where Ken won the main race on Bon Devon beating Musty Smoke (Kevin Hancock) and Conda Boy (Wally Welburn).

Bon Devon was trained at Thangool by Norm Unwin for Bill Lindsay. He previously had won the Calliope Cup (1500m) beating Tablelander who ran second in the 1975 Rockhampton Cup behind Jungle Hunter.

As an aside, there was a maiden winner that day called Prince Titan ridden by then Cairns-based apprentice Peter Wallace.

Nothing special about that you say. Well, to underscore how different racing was in those days, Prince Titan was having his third run in four days, having started twice the previous Saturday at Thangool for a narrow loss and an unplaced run.

Also consider that another horse that day who was having his 31st start in eight months. Think about that. He must have started every week almost.

Anyway, the speedy Galhala carried 68.5kg but could not hold off Arthur Park who had a 12kg weight advantage.

At that point in the season, Galhala had four wins, 10 seconds, six thirds, three fourths and was only unplaced eight times.

Owners, trainers and jockeys from outside metropolitan areas are the backbone of racing. Reading back over my clippings, that fact is reiterated time and time again.

Another character was Mick Hanlon from Theodore, about 200km by road from Rockhampton.
In what was a wet March in 1976, Mick had to negotiate several creeks and flooded flats to make his way to Callaghan Park.

The journey took twice as long as usual, and he arrived about 10 minutes before Darcy’s Double was to run. Not only did the horse get to the barriers on time, but he won the race.

Mick also saddled up Lyaleeta for a smart win later in the day.

Dave Badham from Baralaba, was another who had to deal with the wet conditions that day. He had to make a detour back through Duaringa and take the Capricorn Highway to Rockhampton rather than tackle the Burnett Highway.

It paid off too as Badham had two winners with High Meiza and Master Clyde.

Bush trainers and jockeys deal with distances and obstacles that city-based racing people will never face.

They do it with determination and resilience and the industry could not function as well without them.

Gary Evans was another of Rockhampton’s finest jockeys at a time where he had to compete against the Welburn brothers and Ken Russell.

In 1983 I wrote an article about Gary’s plan to try his hand at driving pacers. He had an association with trainer-driver Wayne Pearce.

Gary Evans had won the two previous jockeys’ premiership (a total of 163 winners and one dead heat) and was obviously at the top of his game.

Wayne Pearce was the premier trainer and driver at the same time. He also trained a couple of thoroughbreds, aboard one of which, Binnen Boy, Gary Evans won a race.

But Wayne Pearce was best known for his pacer Narran River which dominated in Rockhampton and eventually went to Melbourne where he regularly won against the best company.

I can’t tell you if Gary Evans went ahead with his harness racing plans or what he achieved, but it’s another example of the competitiveness that goes with horse racing.

What I can tell you with certainty is that I wrote an unflattering description of one of Gary’s rides one time that got him right offside with me.

And rightly so. I was young and brash, thought I knew what should have happened in that race and reported it that way. I may have even backed the horse; I can’t recall.