My report on Jungle Hunter’s win in the 1975 Newmarket at Callaghan Park.

Jungle Hunter made it a rare double for horses owned and trained at Emerald with a runaway win in the $12,500 Newmarket Handicap (1300m) at Callaghan Park on Saturday.

For the connections and the jockey, Viv Welburn, it was their first Newmarket win.

After getting away well from the wide barrier, No 14, Viv Welburn had Jungle Hunter up near the lead approaching the 800m.

Prince Falcon let at this stage, but Jungle Hunter was going so easily that Welburn allowed him to stride to the front before the turn.

Jungle Hunter kicked clear on straightening up and left the others floundering as he coasted to the line by three lengths, establishing a course record of 1min 18.7sec.

Burgundy, the 7-2 favourite, had every chance and ran an honest race for fourth.

Laal Jester, which was well backed and started second favourite at 4s, led early, but found the task beyond him and weakened into seventh.

Despite his slashing second to Brightlights in the Lightning Handicap (1000m) the week before, Jungle Hunter started at 14s, after 16s had been bet.

Mr Auriac said he bred Jungle Hunter from Hunter’s Lass, a mare bought in South Australia as a yearling. Her only win was in a weak hurdle race at Daley Waters (Northern Territory).

He said Saturday’s run was only Jungle Hunter’s seventh after an enforced spell of 18 months because of a breakdown. The horse had not been out of a place, having won three races.

In October 1972, Jungle Hunter won the Gympie Cup (1600m) after winning the 1972 Central Queensland Derby (2000m) in Rockhampton. He was ridden by Welburn in the Derby.

For Welburn, at present the leading jockey, it was his biggest win. Welburn recalled the thrill of his first win, Lord Keewattin, at Wondai.

Welburn said he was confident of his chances at the 800m as the horse was travelling well and he knew he had the race won in the straight.

Mr Auriac said that Jungle Hunter should start in next Saturday’s Rockhampton Cup (2000m). He added that he was not confident of the horse’s chance as he was trained specifically for the Newmarket.

A start also depended on how well the horse does during the week. 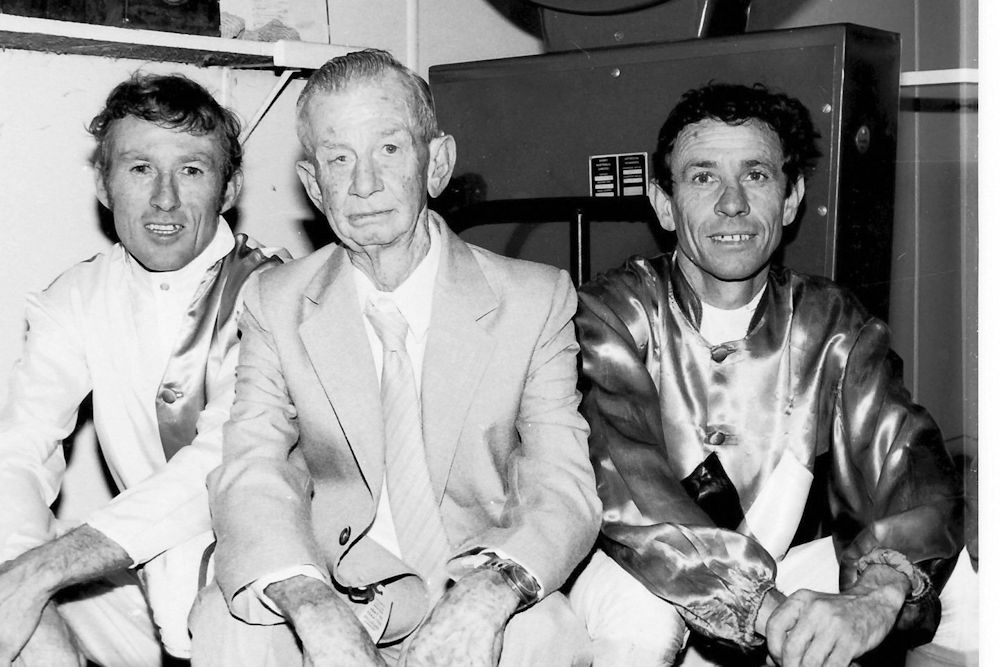 Two of Rockhampton’s most successful jockeys during the 1970s and 1980s were brothers Wally (left) and Viv (right) Welburn. They flank their father Bill, who was also a successful jockey. I took this photo in 1983 at Callaghan Park.