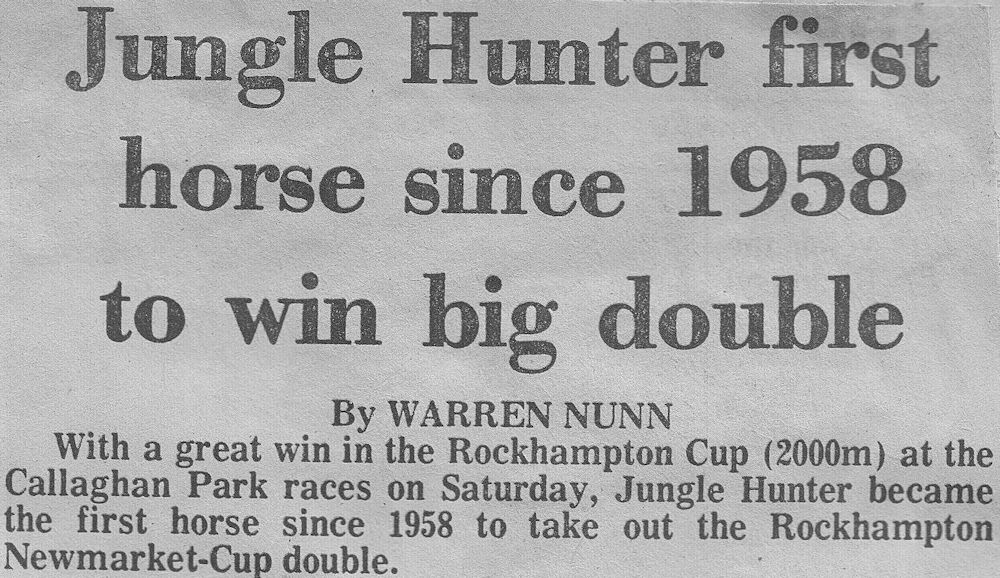 My report on Jungle Hunter completing the Newmarket-Cup double back in 1975.

With a great win in the Rockhampton Cup (2000m) at the Callaghan Park races on Saturday, Jungle Hunter became the first horse since 1958 to take out the Rockhampton Newmarket-Cup double.

He also ended a nine-year drought for Central Queensland-owned-and-trained horses in the big event.
Before Jungle Hunter, only three horses since 1945 had completed the double. They were Royal Brown (1951), General Rep (1953) and Midas Double (1958).

Never worse than third, Jungle Hunter surged to the lead soon after straightening, came away and had an easy win.

Starting at 8s, Jungle Hunter was ridden the perfect race by Brisbane jockey Graham Ireland, who was having his first ride on the track.

Second in the race was the consistent Tablelander, ridden by another Brisbane hoop, Lyle Rowe. Tablelander started at 10s.

The outsider at 50s, Even Decision, with Lloyd Brazier (Rockhampton) aboard, was third, just in front of the unlucky So and So.

By the little-known sire Jungle Bridge, Jungle Hunter put up what could be described only as a freak sprinting-staying performance.

Jungle Hunter is owned by Mrs Yvonne Auriac and is trained by her husband John, at Emerald. Mr Auriac manages the property, Iona, near Emerald.

Jungle Hunter returned to racing at Emerald on March 29 after an enforced 18-month spell because of a breakdown. He finished second to Dillinger, carrying 65kg.

He won at his next two starts at Springsure and Emerald before finished third to Regal Favourite over 1200m at Emerald on May 17.

He then came to Rockhampton and started his amazing run of success which netted his connections almost $21,000 in three runs in as many weeks.

On June 7 he was second to Brightlights in the Lightning Handicap (1000m). A week later he won the Newmarket Handicap (1300m). He capped it all off by winning Saturday’s Rockhampton Cup (2000m).

The win was a training feat in itself, because Auriac had no distance races with which to get his horse  solid for the Cup.

After the horse’s win in the Newmarket, Auriac was first to admit that he had been doubtful about the horse’s chances in the Cup.

He attributed the success to the horse, which showed rare courage in both his wins.

Mr Auriac has no ambitious plans for Jungle Hunter. He said the horse would be turned out for a spell. He had no plans for a trip to Brisbane.

“He is a Rockhampton horse,” he said.

Jungle Hunter has won in open company at Albion Park. His other major success includes the Central Queensland Derby (2000m) and the Gympie Cup (1600m) in the same year, 1972.

Peter Wrigley (Brisbane) was disappointed with the effort of the 5/2 favourite, Idnerak, which finished sixth.

“He was going all right but was gone half-way round the turn,” Wrigley said.

The hard luck story of the race came from Geoff Booth, rider of the fourth horse, So and So. Booth said he struck trouble in the straight just after the start and at the 800m.

He said he did not know how well the winner was travelling, but, with a run at him, he thought his horse would have won.

John Morris, owner-trainer of the second horse, Tablelander, said the horse would start in the Mackay Cup (1800m) next Saturday.

Viv Welburn, who rode Sir Wiggles, which finished a disappointing 11th, said there were no excuses for his mount.

Welburn rode Jungle Hunter to victory in the Newmarket and had first option on the ride in the Cup, but decided to stick to Sir Wiggles, which, he said he was sure, would run the distance.

The victorious jockey, Graham Ireland, said he was confident at all stages and the only time he was worried was when the horse ran out when hit with the whip at the 200m.

Jungle Hunter’s time for the distance, 2min 9.7sec, was well outside of Hectique’s record of 2min 6.1sec.

The track upheld its reputation for being one of the best wet-weather track in Australia.

Despite 25mm of rain during the week, it dried out in the sunshine, aided by a blustery wind, and was in almost perfect condition by the time the Cup was run.

2021 update: I should add that Jungle Hunter ran second to Lumley Fair in the 1976 Cup. See this link for list of Cup winners.