John and Gisele Horne set out to take on the world

A family of five will leave on today’s high tide from the Fitzroy River to travel to Thursday Island in North Queensland in an inflatable dinghy. 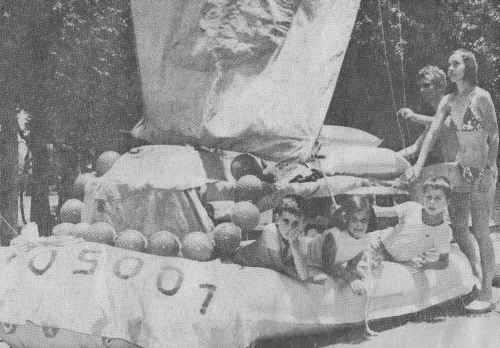 Mr and Mrs John Horne will set out with their three children, Andrew, 11, Kerstin, nine, and Karsten, eight, in their dinghy called the “Ferry Ho”.

Virtually unsinkable, it is made from a tough nylon material, and is fitted with a sail and is equipped to take an outboard motor.

Mr Horne and his family brought their boat and provisions from Melbourne by passenger coach. Mr Horne migrated with his family from Britain about five years ago.

He has been the manager of a music firm and has worked as a paid entertainer. Mr Horne said that he hoped to open up a business in Queensland in the future.

His wife, Gisele, who was born in Germany, successfully completed a navigation course for small boats, while in Victoria.

The dinghy is fitted with space for food while a smaller dinghy trailing behind will be used to carry petrol for the outboard motor as well as other provisions.
Mr Horne said that the particular type of dinghy is used for rescue operations in England.
“The dinghy cannot capsize because its buoyancy,” he said.
“In case of emergency we have dried food and vitamins to last 30 days and water which can be rationed to last 25 days,” he said.

Mr Horne has rifles on hand in case of a shark attack. Other safety equipment on board includes a radio, flares, safety jackets, charts and compasses.

During the trip the family will be linked with ropes in case of any one being washed overboard, but they will have ample room to move.

Mr Horne said he planned to keep close to the mainland or skip from island to island. “At night we would have to beach the dinghy and sleep on the beach,” he said.

Author unknown (possibly Reg Birch)
A family who had planned to travel to Thursday Island by rubber dinghy from Rockhampton on January 20 are now in Cooktown.

Mrs and Mrs John Horne and their three children planned to leave Rockhampton in the dinghy, the Ferry Ho, and sail to Thursday Island.

They decided to abandon their trip after advice from Harbours and Marine officers.

Mrs Horne said in a letter to “The Morning Bulletin” that the family intended in a few years’ time to make the journey to Thursday Island by the Ferry Ho. By then they would have learned about the wet season, the coast and associated dangers.

Mrs Horne wrote a letter from Cooktown saying that they had travelled by road and were carrying on to Thursday Island.

The Hornes had encountered several unexpected difficulties in their trip north.
As most of their travelling was done by hitchhiking, they were bitten by insects and drenched by rain on several occasions.

Mrs Horne said they had seen plenty of wildlife, caught fish and had learned some of the ways of the tropical north.

Now a movie is being planned

In 2018, I was approached and interviewed by a young man named Alessandro Frosali who wants to make a movie about the Horne family’s adventure.

He is taking on an enormous task in putting together the details of what the Horne family experienced after they left Australia. Thereafter he has to pitch it and get to a point where the project could succeed and a movie made.