Many people tend to see genealogy as a boring, uninteresting pastime.

Why spend time in the past looking at old records? Why not focus on the people around you and enjoy your family who are actually alive? In some ways you can understand where they are coming from. 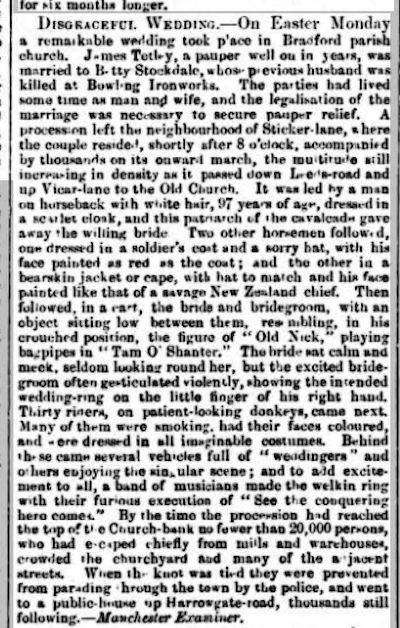 A newspaper report of the Tetley-Stockdale wedding. See below for full transcript.

However, for those of us who enjoy the thrill of tracking down an elusive person, there is something really satisfying about a job well done.

Some times your theories are justified; you’re triumphant. Other times you have to give up as the records don’t allow you to properly identify someone who is vital to your research continuing.
Then there are times you come across a piece of information that amuses, intrigues and in many ways shocks you.

Then, there are times when something so baffles you; you can’t believe what’s on the page in front of you.

For those of us who troll through old online newspaper files for pieces of elusive information, it’s hard not to look elsewhere on the page for what was going on at the time.

An account of a wedding in Bradford, York, is one of the oddest things I’ve yet come across.
It’s hard to sum up or to even know how to begin to discuss it.

It was reprinted from the Manchester Examiner newspaper and appeared in a Suffolk, England, newspaper called the
Bury Free Press on 18 April 1857.

What follows is a transcript:

DISGRACEFUL WEDDING.-On Easter Monday a remarkable wedding took place in Bradford parish church.
James Tetley, a pauper well on in years, was married to Betty Stockdale, whose previous husband was killed at Bowling Ironworks.
The parties had lived some time as man and wife, and the legalisation of the marriage was necessary to secure pauper relief.
A procession left the neighboughood of Sticker-lane, where the couple resided, shortly after 8 o’clock, accompanied by thousands on its onward march, the multitude still increasing in density as it passed down Leeds-road and up Vicar-lane to the Old Church.
It was led by a man on horseback with white hair, 97 years of age, dressed in a scarlet cloak, and this patriarch of the cavalacade gave away the willing bride.
Two other horsemen followed, one dressed in a soldier’s coat; and other in a bearskin jacket or cape, with hat to match and his face painted like that of a savage New Zealand chief.
Then followed, in a cart, the bride and bridegroom, with an object sitting low between them, resembling, in his crouched position, the figure of “Old Nick,” playing bagpipes in “Tam O’Shanter.”
The bride sat calm and meek, seldom looking round her, but the excited bridegroom often gesticulated violently, showing the intended wedding-ring on the little finger of his right hand.
Thirty riders, on patient-looking donkeys, came next.
Many of them were smoking, had their faces coloured, and were dressed in all imaginable costumes.
Behind them came several vehicles full of “weddingers” and others enjoying the singular scene; and to add excitement to all, a band of musicians made the welkin ring with their furious execution of “See the conquering hero comes.”
By the time the procession had reached the top of the Church-bank no fewer than 20,000 persons, who had escaped chiefly from mills and warehouses, crowded the churchyard and many of the adjacent streets.
When the knot was tied they were prevented from parading through the town by the police, and went to a public house up Harrowgate-road, thousands still following.-Manchester Examiner.

So there you have it! Can you picture the scene? It seems that some of the townsfolk were either unhappy or simply amusing themselves at the expense of James Tetley and Betty Stockdale. The couple were going to take advantage of the situation and “live off” society when previously they had not chosen to be married.

That was a big deal more than a century and a half ago but it still leaves me scratching my head over the odd behaviour so described.

A near 100-year-old man with white hair on horseback conjours up images of Gandalf from The Hobbit; the spectre of James Tetley as he “gesticulated violently” and he showed off the wedding ring, sounds a bit like The Hobbit’s Gollum and his “precious”.

Forgive all this wild imaginings but how can you not be anything but taken by the whole scene of thousands of people ‘celebrating’ an event which while important to those involved, had nothing to do with the “weddingers”?

What the newspaper report did not tell us was the more mundane things that interest family researchers about names, parentages, ages, etc.

It was easy to establish that the wedding was a real event as an online research easily revealed the original church entry of James and Betty’s big day.

Note that James Tetley signed in his own hand, but Betty only left her mark.
As well, a comber was a worker who combed wool during preparation. Bradford, of course, had many mills during the 19th century.

All of the above interests we genealogists because it gives life to a handful of words from a dusty church register that simply records the basic details of individuals as they go through the marriage ritual.

A search of records reveals James Tetley was born about 1791 in Yorkshire and there is a probable 1870 death in Bradford.

According to a family tree on ancestry.com, Betty Stockdale (born Elizabeth Halliday) was born 22 Apr 1799 in Birkenshaw, Yorkshire, England and died 16 Feb 1890 in Bradford, aged 90.

So, what of these two lives? While seemingly ordinary, they certainly had a memorable experience back in 1857.

And that makes for a memorable experience for this family researcher.