Back after hectic 10-day journey 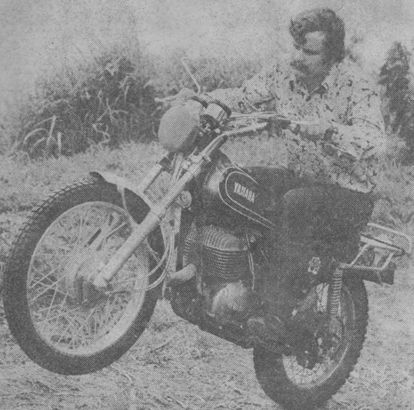 Hans Tholstrup on the bike that took him across Australia.

Hans Tholstrup, the Danish-born adventurer, was in Rockhampton yesterday after a hectic 10-day motor-cycle journey across Australia.

Tholstrup left Rockhampton on November 6 and arrived in Perth on November 15.
Only five days, however, were spent travelling.

While in Alice Springs, Tholstrup could not get a permit to continue through to Warburton Mission.

He was only allowed to carry on after hiring a four-wheel-drive vehicle equipped with a radio.

He left with the bare essentials — 11 gallons of petrol, five gallons of water, emergency food for three days, two spare tubes, a tyre lever and a pump.

Tholstrup had several falls from the motorcycle during his long trek. On the second day of his journey it took him eight hours to travel 70 miles.

The only time he thought he would not make it was when he was travelling through the Simpson Desert. After falling off several times, Tholstrup said he was badly bruised in both legs.
After the journey he found he had broken a bone in his right hand.

Before undertaking the trip, Tholstrup had been riding a motorcycle for only one week.
One thing that impressed him during the journey was the lack of wildlife.

He thought the amazing thing about his journey was that he had only one puncture.
Tholstrup said yesterday that his next trip would be to the Antarctic. He would be travelling by snow-mobiles to the South Pole.