ROCKHAMPTON.- Not too many racegoers would know much about the deeds of the former galloper First Demon. But a photograph of the 1893 Rockhampton Handicap winner is a prize possession of the Central Queensland Racing Hall of Fame and Museum at Callaghan Park racecourse. 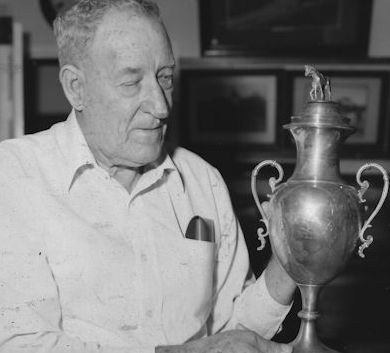 Frank Stewart holds a trophy which is on display at the Central Queensland Racing Hall of Fame and Museum.

The Hall of Fame came into being through the energies of Frank Stewart, a racing historian and student of thoroughbred breeding.

As a young man Frank saw the need to record the history of racing when he read an article in an American paper about setting-up a racing museum in the 1940s.

But it was not until the 1960s that the idea surfaced again in his mind, prompted by a display of photographs and other articles set-up by the Australian Jockey Club.

An approach was made to the Rockhampton Jockey Club about five years ago by Frank and local bookmaker John Day.

The club endorsed the idea and there wasn’t a prouder man in Australia than Frank Stewart on November 15, 1980, when the late James McGill officially opened the Racing Hall of Fame and Museum.

The museum had about 70 items, but that number has grown to around 200 in the past three years. In establishing the museum, people have donated pieces from their personal collections and photographs have been restored.

Several photographs belonging to the late Arthur Headrick were rescued from a loft in the East Street building from which the Headrick family ran a business.

“We approached Burns Philp, the then owners of the building, who said the photos were in the loft. John Day had to climb up a rickety set of stairs to get them,” Stewart said.

According to Frank many people played an important part in making the museum a success, including Stuart and Joan Beak who worked on the restoration of photographs, Cecil Davies, the museum’s official photographer and John Day, who aided him in the hunt for material.

Frank and his wife Mary are the official museum attendants and they conduct tours for special parties as well as opening up the display on major race days.

“The objective of the promotion subcommittee of the RJC in establishing this Racing Hall of Fame and Museum is to collect, display and preserve items of interest relating to Australian racing in general, and Central Queensland racing in particular,” Frank said.

The history of racing itself in Rockhampton is thing that Frank speaks about enthusiastically.

The RJC first raced at an area about 3km west from the site of the Connor Park aerodrome before moving to North Rockhampton in 1898.

There was another racetrack used by Tattersall’s Club at Connor Park. Because the land where Callaghan Park is now situated was part of a reserve under the jurisdiction of the North Rockhampton Borough Council, the RJC had no control over its use.

But in 1911 the area was gazetted as a racecourse reserve and the RJC was able to establish its headquarters.

It was in 1912 that the course officially became known as Callaghan Park, named after Dr William Callaghan, an official of the RJC from its earliest days.

First Demon’s wins included the 1893 Rockhampton Handicap (the forerunner to the Rockhampton Cup which was first decided in 1918), a Barcaldine Railway Handicap, Rockhampton Tattersall’s Club Handicap, a Queen’s Plate and a QTC Midsummer Handicap.

But the museum has a lot more to offer than just photographs of horses. Also on display are cups, sashes, bracelets, photographs of prominent racing identities and events at Callaghan Park, race records, newspaper articles and books on racing.

A search of newspaper archives at http://trove.nla.gov.au reveals that the Rockhampton Handicap that First Demon won was raced over 2 miles (3200m) on Friday 16 June 1893.

The winner’s prize was 200 pounds. First Demon at the time was a four-year-old bay gelding sired by Comet. His dam was Fair Jane. Owned by the trainer R.Johnson, First Demon carried 6st 8lb and was ridden by J.Miller. His winning time was 4 mins 8.5 secs.