Sully’s stumped some of the best

“Waddya cryin’ for” is a phrase that local, state and test cricketers around Australia would have heard over the years from Sully… probably the nation’s No 1 barracker. 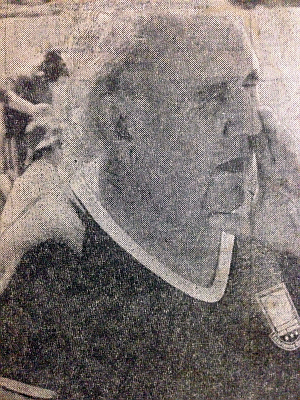 Copy of newspaper image of Alaric Sullivan that I took in 1983. I’ve since misplaced the negative; hence the poor quality. Sully passed away in 1989 aged 72.

Few know the man as anything other than Sully, but he is Alaric Sullivan, a 67-year-old bachelor who has spent a lifetime following sport.

Sully received some expert tuition as a youngster on the Hill at the Sydney Cricket Ground from the legendary Yabba* from whom he says he got his encouragement to barrack. “I couldn’t out barrack Yabba but he was good company and a good tutor,” he said.

From the time he was a teenager Sully has watched and mixed with State and Test cricketers of the day. In fact, the first time he saw a test match in Sydney when just 13, Sully was taken to the ground by former Australian player Alan Howell.

As Sully puts it: “I’ve been giving advice to Queensland and Australian captains for 50 years and I’ll be available to give Allan Border advice when he captains Queensland for the first time.”

Players are well aware of Sully’s presence at the different grounds — because to those who know his voice, it is unmistakable.

When the Sir Donald Bradman stand was officially opened at the SCG, The Don was there for the occasion and much was being said about Sir Donald’s record which prompted Sully to pipe up and say: “What about the duck you got against Queensland when Eddie Gilbert got you.”

Sir Donald was not the least perturbed. In fact he came over and shook Sully’s hand and told him he had heard his comments before that day.

But Sully got into hot water at Adelaide the day that Greg Chappell made his debut for South Australia against Queensland. His barracking resulted in him being asked to leave the stand, but they relented and let him back later.

The Queensland team, in particular, has appreciated Sully’s support over the years and last season Greg Ritchie presented him with an autographed photograph of the Australian team that played in Pakistan. For Sully it is a prized possession.

A couple of years ago Greg Chappell invited Sully to the official stand during a Queensland-NSW match at the SCG. It took six players to convince Sully, but he went along and gave a “pep talk” to the team. “However, they didn’t do any good in the game,” he said.

Through all of his advice, whether it be who to bowl next or how to place the field, Sully has always remained a gentleman. He refers to Greg Chappell as Mr Chappell and Allan Border as Mr Border, and so on.

As far as most sporting bodies in Rockhampton he has a heart as big as the Pacific Ocean. He sponsors rugby league, softball, netball, basketball, swimming, cycling and Australian rules to name a few.

Rugby league is Sully’s other great love. He played until he was 31 in Maryborough, Ipswich and Townsville as well as Rockhampton; always as hooker. When he took to coaching he had international players Duncan Hall and Ron Griffiths under his wing at one stage.

Strangely enough, Sully came from a rowing family at Maryborough and in 1924 was the Wide Bay eight’s mascot when they took out the King’s Cup — the champion eights of Australia. 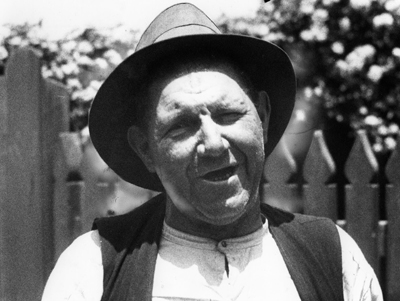 *For those who don’t know, Yabba was a legendary Australian barracker … or heckler. Part of the wikipedia entry on him reads thus:

Stephen Harold Gascoigne, better known as Yabba, (19 March 1878 – 8 January 1942) was an Australian sports fan, remembered as a heckler at Sydney Cricket Ground cricket and rugby league games in the early part of the 20th century. Yabba was known for his knowledgeable witticisms shouted loudly from “The Hill”, a grassy general admissions area of the SCG.

UPDATE 2017: Sully was born Alaric Hayes Sullivan, the son of Andrew Sullivan and Marie Elise Bruggemann on 3 October 1916, presumably in Maryborough because that’s where his parents lived, according to the electoral roll.

Andrew Sullivan was an engine driver and young Alaric also worked for Queensland Railways as well.

He was a larger-than-life character at the Rockhampton railway workshops and was variously called “Soapsuds” or “Lifebuoy”, apparently because he lacked personal hygiene. Lifebuoy, of course, was a soap brand.