Three images from my time as a journalist in Rockhampton. On the phone, paddling through floodwaters at Callaghan Park racecourse, and interviewing then ALP leader Percy Tucker.

Just a few weeks short of my 18th birthday I walked into the newsroom of the Rockhampton Morning Bulletin newspaper and took the first steps on what has been an interesting and challenging journey.

I’ve worked for several newspapers, a magazine with a website and as a volunteer with a radio station. When I started, the hot metal process was in its final days; when I finished, newspapers were failing and closing. 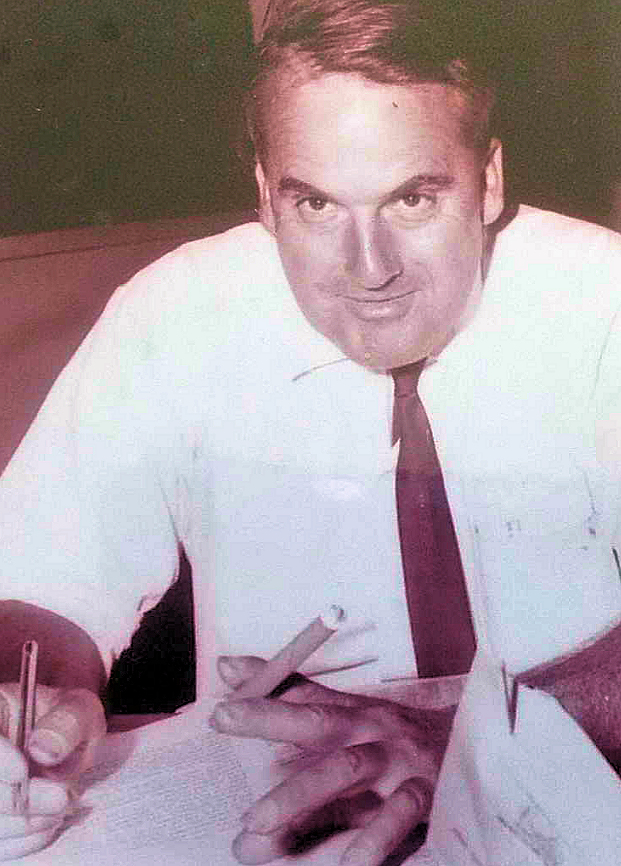 Frank Sanderson. How well I remember those cheap cigars.

From 1972 until 2013 when redundancy ended a 27-year stint with The Courier-Mail, news and newspapers dominated my life.

There is so much that impacted me in those four-plus decades, but for these reflections, I will focus on a few people who greatly influenced my career and two of them who became lifelong friends.

The inimitable Frank Sanderson was my first newspaper contact. He was the paper’s Chief of Staff and he saw something in me to give me a start.

I didn’t appreciate Frank at the time, but eventually I became very grateful for his decision and I told him so … 41 years afterwards in an email.

We’d made contact again but he passed away a few months afterwards in December 2013 aged 89.

Frank was 47 years old in 1972 and to me as a teenager, he was an eccentric old man. I guess “entertaining” might be the way I would now describe him.

He was encouraging and supportive at times and one of his sayings was: “Beautiful bit of copy, matey.”

He hated phones going unanswered and would bellow from his office: “Who’s phone is that? Answer that phone!”

One Frank incident that sticks with me involves an errand I was given. I did not grasp Frank’s request for milk and I returned to the office with a small carton of strawberry milk to discover he wanted it for his tea.

“That’s all right matey,” Frank said as he poured the milk into his cup as well as into another reporter’s (Jack Tadman).

I also note Frank had a wry sense of humour as he referred to himself in an email as “Slanderson”.

For the uninitiated, newspapers for decades operated with reporters and photographers in the field gathering “copy”. That copy would then be checked by sub-editors for various errors before the composing room took on the next stage of producing the physical type that in turn went to the presses.

The three-man nightly team on the Bulletin’s subs’ desk in 1972 were Vic Taylor, who was 68, Alan Moss, aged 71, and Cyril Peterson, just 63. To me they were all crusty old men.

Chief sub-editor Vic Taylor was a particularly fearsome individual. My first encounter was when I cheerfully walked towards the subs’ desk whistling. “Don’t whistle in the newsroom boy,” Vic barked. 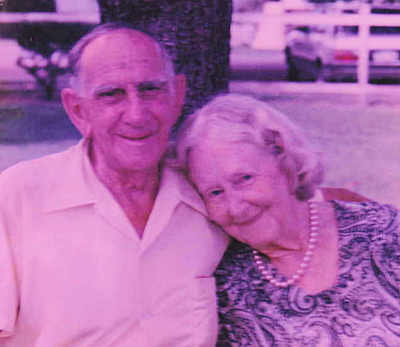 Alan Moss and his wife Rosalie.

I learnt that Alan Moss once worked on The Age newspaper in Melbourne and also was a war correspondent.

He loved to brew up particularly strong tea. Mossy would bring in and use a whole packet of tea each shift.

He could not stand wind blowing on him. Even in Rockhampton’s stifling heat and punishing humidity he’d walk about 30 paces from where he sat, through a narrow hallway, to shut a window at the front of the building.

There was no air-conditioning but there were fans one of which sounded like an aircraft taking off. Mossy would take a long ruler and redirect the fan.

Again, this fan was so far from his desk it puzzled me as to how it could affect him.

As for the rest of us, we sweated and got on with our jobs.

On your bike, Cyril

The quiet, unassuming sports sub, Cyril Peterson, would sometimes take off his shirt and work in his singlet.

Cyril was a bachelor who always rode a pushbike. He lived in Alma St, not far from the Great Western Hotel.

It was said that “Pete”, as Vic Taylor called him, would visit several pubs on his way to work each night. Supposedly he only ever had one seven-ounce class of beer at each stop.

He spent more than 50 years at the Bully and it was not his first job. He apparently started his cadetship on his home-town newspaper the Maryborough Chronicle.

It was up to Cyril to ensure any late-breaking story found a home on the back page. Vic Taylor chose not to change the front page and, instead, would hand copy to Cyril with the instruction, “Get it in, Cyril.”

In 1976 one John Watson joined the Bully. He’d come from “down south” with a big reputation. We became friends as well as colleagues.

That friendship continues to this day.  John is the same today as he was then. Full of life and energy, always encouraging and leading by example.

John looked past my immaturity and helped me strive to do better; even though he didn’t realise it.

A couple of years later Simon Mellick joined the Bully team. We later also worked together at The Courier-Mail.

We are still friends. In our younger days we socialised a bit too much during work hours on occasions in Rockhampton.

Simon went to Brisbane first and I joined him a couple of years later. I relied on him during the tough times that come with working on a major daily newspaper.

Newspapers were good to me. At times they were great.

For those of us who started in the 1970s, we saw huge technological changes. But those changes hugely diminished the impact of the printed word.

But what is journalism?

Journalism is really simple. A journalist gathers the facts and relays those facts to the reader in a fair and even-handed manner.

A journalist should never interpret those facts to fit any agenda.

I submit there is very little journalism that fits those parameters these days.

I naively believed that every journalist I worked with was committed to that ethos. I now know that’s not the case.

I saw the first signs of bad journalism around 20 years ago and it became more obvious when Barack Obama was running for president.

I was staggered by an obvious partisan bent to coverage of that US presidential campaign.

To delve into the reasons would be tedious. I will only say that if anyone who claims to be a journalist disagrees with my assessment, point them to me.