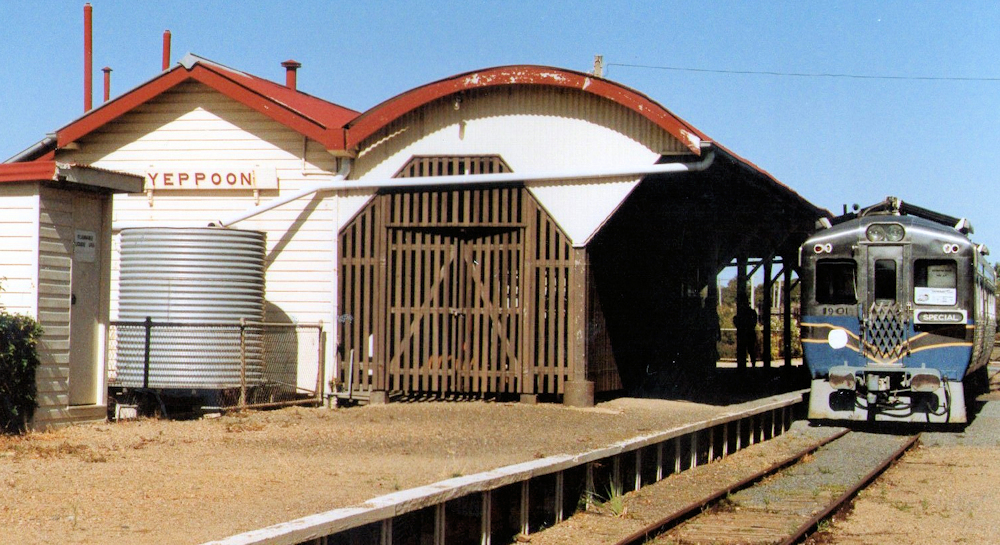 Speed’s the thing, the headline read.

It’s 1943, the world is wrestling with the turmoil that comes with global conflict. Only those who lived through that time can know what speed meant to everyone almost 80 years ago.

Train travel ruled. Cars were a luxury and the road conditions were very primitive compared with what we enjoy today.

In the little part of the Australia that’s most familiar to me, the journey from Rockhampton to the Capricorn Coast is filled with many wonderful memories.

So when I stumbled on a tongue-in-cheek article about train travel from Rockhampton to Yeppoon in 1943, I was intrigued from the opening paragraph.

Written by someone known only as G.W, it started:

As everyone knows, “speed’s the thing these days,” whilst any wastage of man hours is simply playing Hitler’s game.

So when a matter of business called for the presence of your correspondent in Yeppoon for a few hours, railway time-tables were called into consultation. “Nothing could be more convenient,” we concluded. “You hop on Tuesday’s goods-passenger train at 10 o’clock, get there in time for lunch, put in the afternoon, and catch the train home at something to 8.”

G.W. then gave a detailed account of what was anything but a “convenient” trip.

I pause here to observe that “G.W.” was likely to have been George Westacott, whose whimsical writings were well known throughout Central Queensland. He was appointed editor of The Rockhampton Morning Bulletin newspaper in 1954.

I recall him visiting the office in the early 1970s when I was a cadet journalist on that daily newspaper.

But back to G.W.’s account of his train trip …

He vividly described the busy scene at Rockhampton’s Archer Park Railway Station, which is now a wonderful train museum.

It’s very personal to me as my father, Gordon, may have been at the station that day just before his 18th birthday. And it’s also possible that his dad, my grandfather George Nunn, could have been in the cabin of one of the passing locomotives.

Several decades later, my father relieved as station master at Yeppoon and several other places around Central Queensland.

I’d like to think my dad was the “very young porter wearing a very large guard’s hat” the writer mentioned as follows:

As if not to interrupt the porter in his cleansing operations some of the trains by-passed the station by keeping to the lines in Denison Street. This did not apply to the Yaamba Sunshine Express rail motor and van attachment which bustled in with an air of importance, and was duly despatched on her journey with a very young porter wearing a very large guard’s hat, waving “add-jew” to one and all, and feeling on pretty good terms with life in general. At his age who wouldn’t like to be a guard in charge of the parcels on a country-bound stop train, I’d like to know? 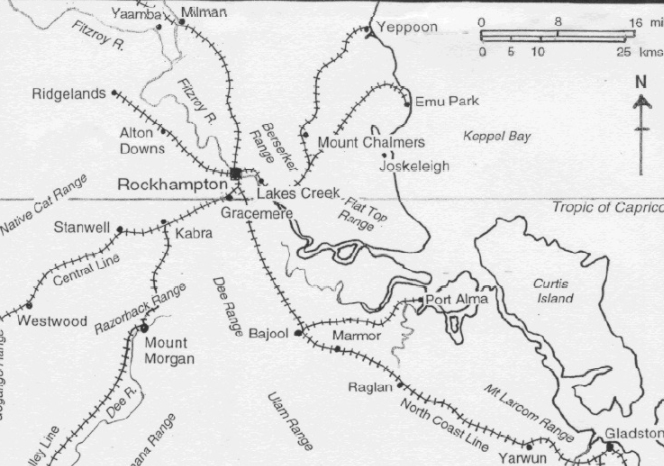 Map of railway lines around Rockhampton from 1940s. For those unfamiliar with the area, note that the Rockhampton to Capricorn Coast line had two branches; one to Yeppoon and the other to Emu Park.

All things come to those who wait, or so it is said. The town clock had struck 11 and the hands of the station timekeeper once more had moved half-way round the circle, one had read and re-read the great news of the Axis rout in Tunisia, and noted for the hundredth time that the only two advertisements on the railway advertising hoarding sang the praises of a lemon drink and Host Holbrooks famous condiment, neither of which seemed to chime in with any plans for rail travel to the seaside or anywhere else. The porter with the hose having made the platform sparkle like a conscientious housewife’s kitchen table announced “You can get moving now, here she comes.” And sure enough here she did come. “She” was a long train, with coal, timber, ore, livestock and goods wagons separating the engine from the passenger coaches. “Well, the first hop has been successful, even if a little behind schedule,” remarked your correspondent, cheerfully resolved to make the best of things and to blink the fact that, according to the time-table it had taken an hour and 30 minutes to reach Archer Park from Stanley Street.

But a fellow passenger issued a warning …..

“You wait a bit,” said a fellow-traveller, who had been examining the chalk marks on the wagons, “There’ll be a hell of a lot of shunting before we get there. Look at that timber for Nankin and those ore hoppers for Mt Chalmers.” But we refused to be depressed. After all, country people have to get their goods, and isn’t it a good thing for us in the towns that someone in the bush wants sawn timber, and that there is a call for full coal wagons and empty ore trucks? Thus we steamed merrily out of Archer Park at some time between 11.30 and high noon.

With a resilient air, he then observed:

We had determined to be unconcerned about shunting, but it wasn’t so easy after Nankin. You learned there, by trial and error, that the train whistle just didn’t mean anything to you. The short blasts announcing the manoeuvrings of the engine went on and on, and we accepted the assurance of a bright small boy that it wasn’t until you felt the bump that you’d know it meant us. The man who had examined with a jaundiced eye the wagons before our leaving, after looking several times out of the window said they were probably relaying the rails to accommodate the Nankin wagon. Perhaps he was only being “sarcastical.” You meet people like that, especially on trains.

G.W. made various other observations and comments about the “arduous” journey, including a extended stop near Mt Chalmers.

But we had not reckoned on a couple of trucks of sleepers that stood at a siding beyond Mt Chalmers. They looked harmless enough and certainly in no hurry to be used. But it soon was apparent that they had to be attached to our train. And not only that but they had to be unloaded at stated points further on the way. Once we must have overshot the mark, for we came back a bit, which earned disrespectful comment from the juvenile passengers. “Hey,” they piped, “don’t take us back to Rocky; we got our tickets for Yeppoon.”

For G.W., hunger also was an issue and one of his concluding observations was:

When next I travel to Yeppoon by the goods-passenger train I expect to note considerable improvements: not so much in the train arrangements. What with manpower and rolling stock shortage we must learn to bear with things; but we do expect to see most of my fellow passengers installed in successful catering businesses all along the line.

I guess the above may seem very foreign to those who know it only takes about 40 minutes in the car to get to Yeppoon.

But for those of us who experienced train rides around Central Queensland, it brings memories of a different time; a time when we were young and could not have imagined the extraordinary changes that lay ahead of us.