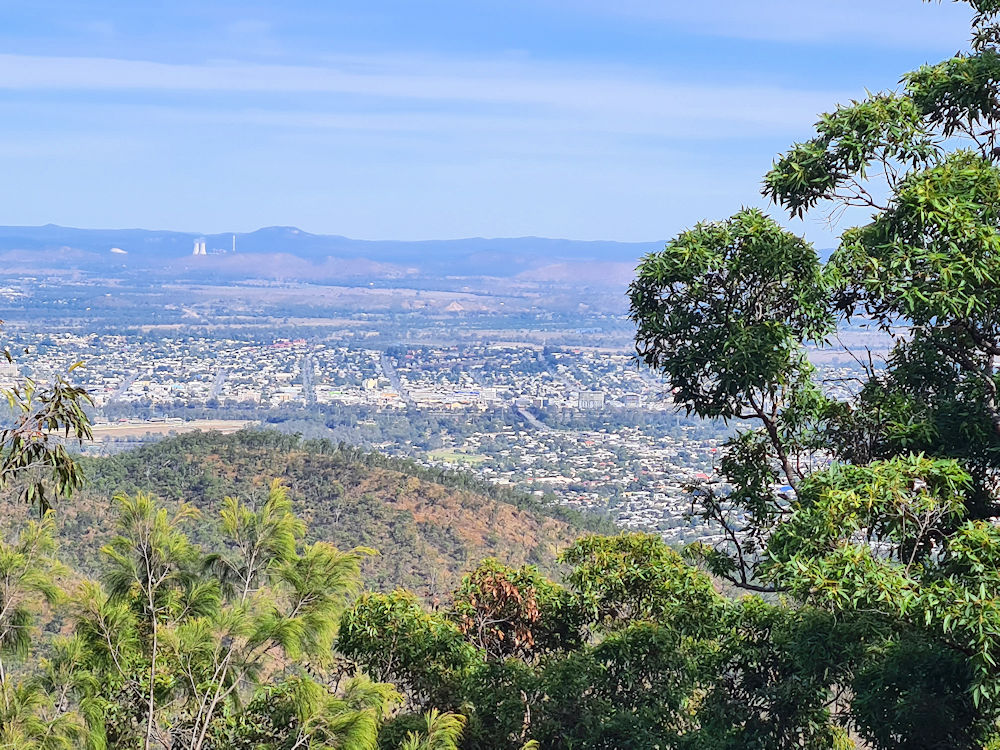 Rockhampton in 2020 seen from Mt Archer. The Stanwell Power Station’s twin cooling towers can be seen in the distance. Unfortunately, from this vantage point, the Fitzroy River is not easily seen.

OK, I admit it, I’ve become really interested in history. When I was gifted a book on Rockhampton’s early history, I could not put it down and read it in a couple of days while also making copious notes.

First published in 1904, J. T. S. Bird’s The Early History of Rockhampton has since been republished (in 2016) and is an enthralling look at how the city was established. 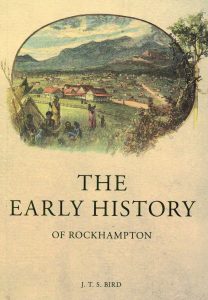 J. T. S. Bird’s The Early History of Rockhampton. It can be purchased from Coorooman Press.

The book is extraordinary on so many levels given its author, John Theophilus Symons Bird, was eyewitness to many of the events he records.

He was just 21 when he arrived in Rockhampton in 1863 and mostly worked (for 48 years) at the Morning Bulletin newspaper as the composing room foreman.

Bird was obviously a scholar and also wrote for the paper. He hits every mark of a professional wordsmith in the 528-page book. I could write much more about Mr Bird and also share something in common with him given I spent my first 11 years as a journalist on the very same newspaper as he worked.

So connected was Bird to Rockhampton’s history that he not only gives an account of individuals and events, but also he in some cases gives a potted history of a particular family.

He mentions several immigrant ships and discusses various individuals. For instance, Bird arrived aboard the Beejapore in 1863. One of the families mentioned are the Dempseys. Of them, he writes:

Mr and Mrs Dempsey and a large family of sons and daughters have nearly all done well in Queensland by hard work and perseverance. Messrs. Edward and G.Dempsey reside at Duaringa, and another brother, Mr M. Dempsey, who married a Miss O’Brien, is a manager of a sugar plantation at Geraldton (now called Innisfail). Mr Joseph Dempsey, having made a fortune, has gone to Ireland. The father has been dead for some time.

As a family researcher, such background information is invaluable when tracing people.

Even as a less-than-enthusiastic student, I knew that the Archer brothers were the first Europeans to settle in the district; at Gracemere. Even though the Archers did not live in the new township, it was established because of them.

There are many (to me) really interesting portions to The Early History of Rockhampton, an obvious one being the many early settlers whose surnames live on in street names. 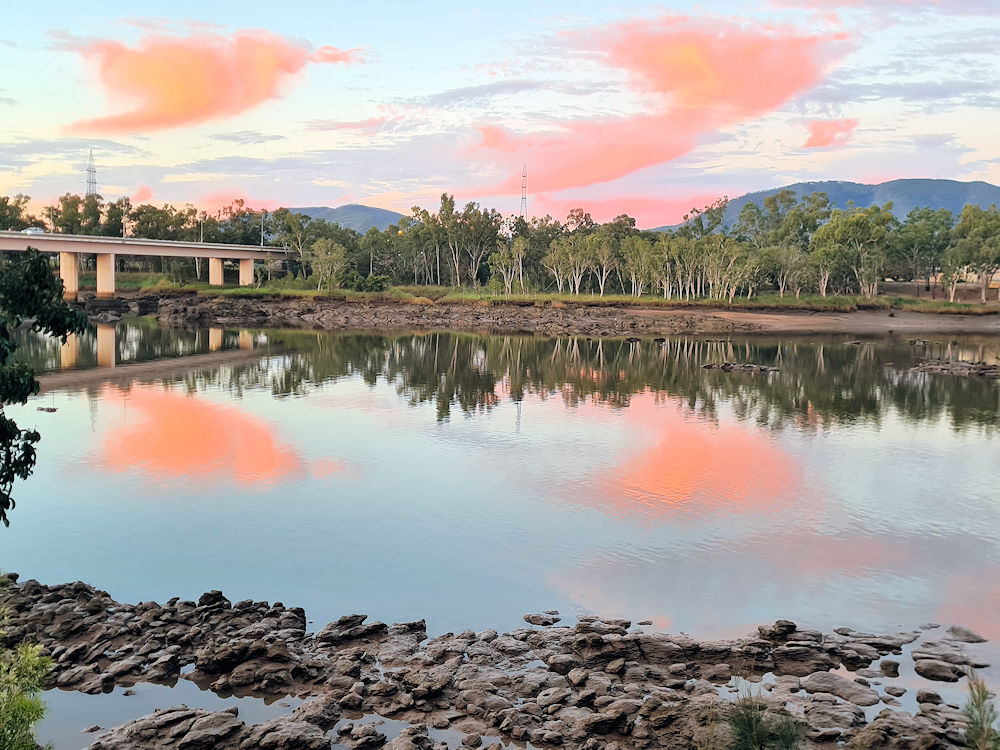 Of the many anecdotes, one stands out as a testimony to mateship forged by individuals who worked together.

In 1855, one Philip Hardy, who captained the schooner Albion, carried cargo for Mr Charles Archer from Gladstone to the banks of the Fitzroy River where Rockhampton now stands.

Among Hardy’s crew were Charles Haynes and John Hadgraft. More than 45 years after that event, Hardy, Haynes and Hadgraft all lived in Brown St, Rockhampton, which runs between Queen Elizabeth Drive and Musgrave St.

And anyone who knows the Park Avenue area will recognise that streets there bear the names of those three men. 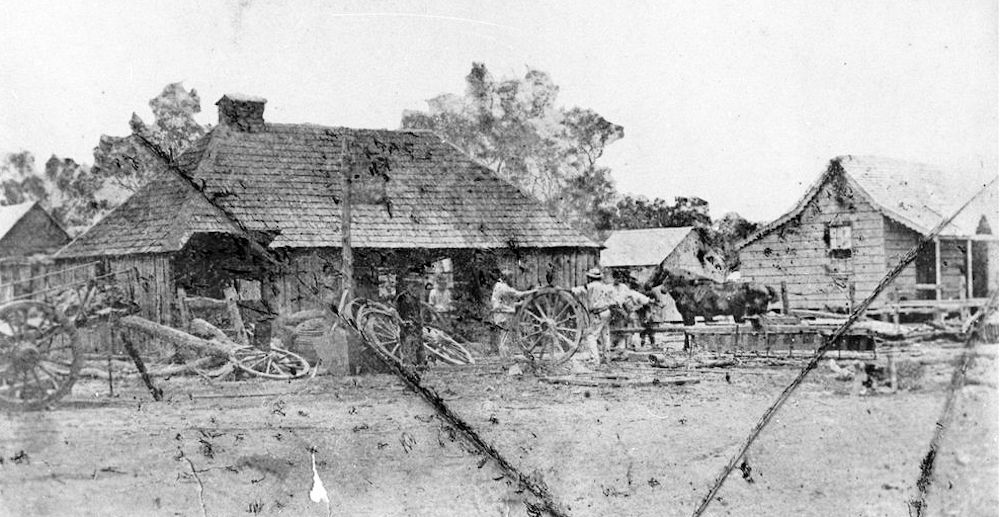 William Orchard’s blacksmith shop around 1860. It was located at the upper end of East St.

When a cyclone and flooding hit Rockhampton in 1864, it was an extreme challenge to put out a newspaper. Presumably the editor of The Rockhampton Bulletin and Central Queensland Advertiser wrote the following when he waxed lyrical about the effort to produce a paper under really trying circumstances:

A roofless building, exposed to a high wind and a pitiless rain, is not the most convenient place either for literary or typographical composition.

Yet, owing to an unfortunate accident, such are the circumstances under which this day’s issue has been published; and to the difficulties thus superintended, we trust our readers will charitably debit all shortcomings. 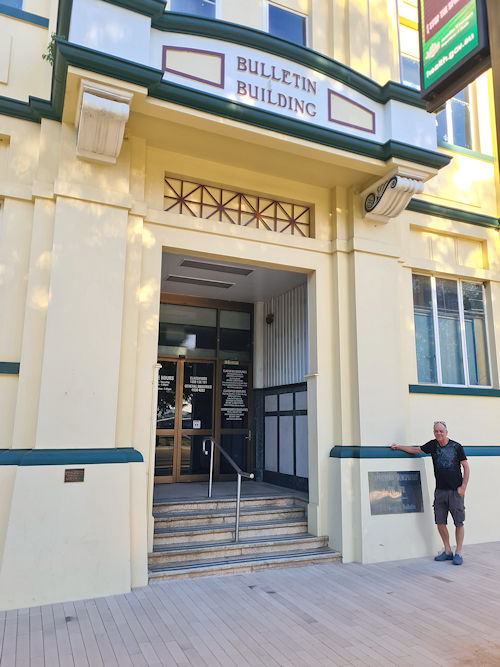 The Rockhampton Morning Bulletin Building where I worked from 1972 to 1983. The paper is only an online publication these days and its journalists no longer operate from this Quay St address.

Oppressed by a violent storm, and visited by a flood that threatens to overstep considerably the height attained by the February inundation, we do not expect anyone will exhibit much interest in affairs removed from their own sphere of action, and this belief materially lightens our labour by limiting our choice of subject.

Blurred and blotched by “heaven’s distilled,”-deafened by the shrieks of the wind, and flapping of corrugated iron,- our letters and our thoughts alike run in a watery vein, and restrict speculation to the probable duration of the present unfavourable weather.

In the meantime the rain pours down and the wind beats, searching every crevice, prising every defective nail, and unroofing many a flimsy edifice and fine-weather verandah.

The town bears the appearance of a wet Sunday, shop-keepers not thinking it worth while to open their shops. The low-lying streets are covered with water, sea-gulls disport themselves on the only macadamised road, and play around the puddles in Quay-street.

As for the River, it rolls majestically onwards, rising in its relentless height each hour, and submerging the frail tenements on its borders.

Communication is cut off between customers and producers, even in the town – how much worse, then, it must be in the country, we leave to the imagination of our readers.

The butcher, the milkman, and others whose business involves daily calls throughout the suburbs, can scarcely face the storm, and the situation of the miners on Peak Downs is in reality paralleled, to a limited extent, by the residents in the outskirts of the Municipality.

Under such circumstances patience is the only remedy, cheered by the conviction that this present visitation may be the last for the season.

It was not quite the same, but I recall water pouring into the Bulletin building after a particularly heavy downpour one stinking hot afternoon in the 1970s. The composing room was particularly awash but the paper still came out. The compositors sloshed around in water as they made up each page for the press. I can’t recall how it affected we journalists but we were obviously still able to use our typewriters. 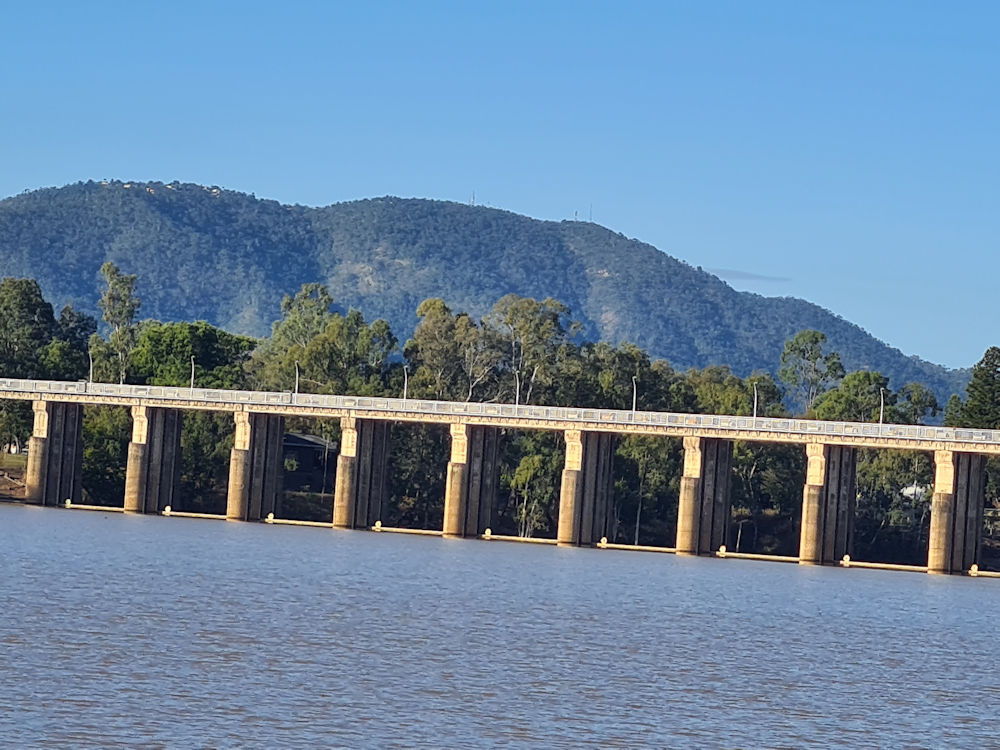 Looking down the Fitzroy River from the Ski Gardens towards the barrage. Mt Archer in the background.

As I got older, I became aware of a ongoing rivalry between Rockhampton and its near neighbour, Gladstone. There’s only just over 100km separating the settlements but the distrust seems to go back as far as 1861 because of an incident that Bird mentions.

The text of the event says it all. Rockhampton’s early settlers were incensed that Gladstone “stole” passengers intended for their new settlement. Seems rather petty 150 years later, but I submit it did not help relations between the towns. Rivalry is nothing new, of course.

When it was found in 1861 that the Persia, the first immigrant ship for Central Queensland had been sent to Port Curtis instead of Keppel Bay, considerable indignation was shown by the Rockhampton people, and a public meeting was promptly held to bring the matter before the Government, which was by this time the Queensland Government. The inhabitants, it will be noticed, were fully alive to their interests in those days, and expressed themselves in no uncertain voice.

Looking across Mt Morgan towards the gold mine which greatly contributed to the area’s prosperity. No account of Rockhampton is complete without reference to gold mining in the district.

I am a second generation Central Queenslander as my paternal grandfather and his family came to Bluff from Ipswich (the Queensland Ipswich) around the same time Bird’s book was first published. Even though I was born in Gladstone, Rockhampton was where I spent my formative years.

My Nunn family came to CQ for coal mining (at Bluff) and eventually ended up in Rockhampton. My main maternal family (the Cokers) came from London to Rockhampton in 1870 where in the 1880s James Coker disgraced himself while Town Clerk of the North Rockhampton Borough. 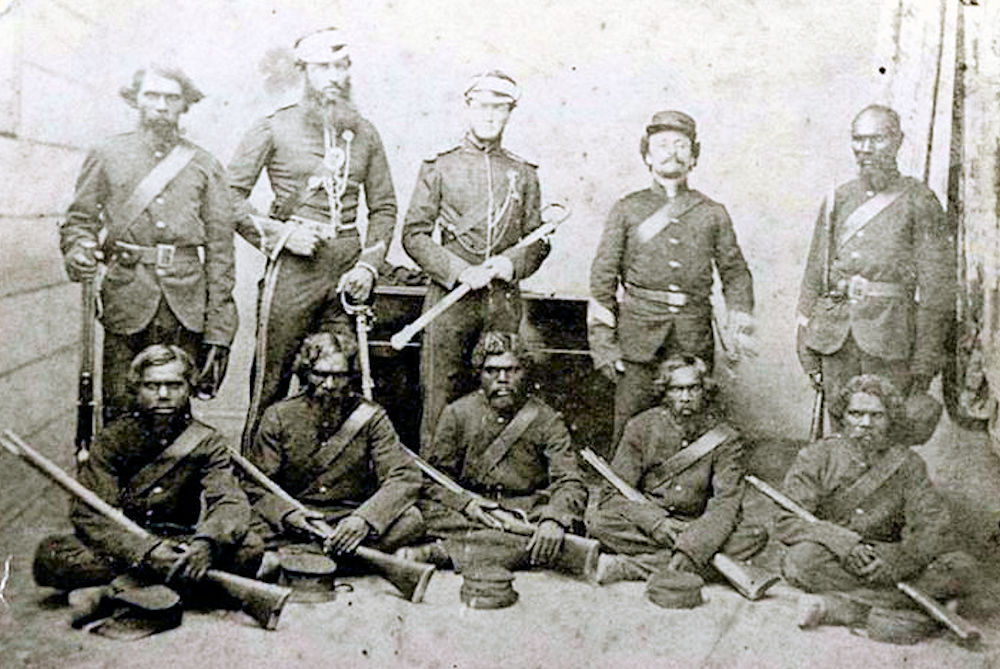 Rockhampton police officers in 1864. The tallest officer is Chief Inspector George Murray who, after his time in Central Queensland, became senior state magistrate based in Brisbane.

In those early days, as the above photo show, the services of native Australians was vital in tracking down criminals.

Probably the most shocking crime in the Rockhampton district was that perpetrated by the then Gold Commissioner Thomas John Griffin. He killed two colleagues and stole about £8,000. He was quickly caught, convicted and executed.

The murders happened west of Rockhampton in 1867 somewhere near the confluence of the Dawson River and the Mackenzie River which then becomes the Fitzroy River. My grandfather, who had property on the Dawson River not far from where the crime occurred,  occasionally spoke about the event.

Just like any other district, there are many other events that can be recounted. History rightly fascinates us because it holds up a mirror to our world.