Over the Christmas holiday period in 1972, about 100 primary school boys from eight regions gathered in Rockhampton for an intra-state cricket carnival.

Carl Rackemann was a tall man and had what many considered to be an ungainly bowling style.

As an 18-year-old journalist who attended every day of the carnival and reported on it for The Morning Bulletin newspaper, it was an interesting experience as it started me on my journey of gathering information.

Even though I kept many of the clippings from the carnival plus the official programme, I don’t have an exact record of all  performances. One of the first things I did was to walk around and talk with a representative of all of the teams to get first names for all the lads.

Over the course of the carnival, a couple of individuals stood out to me.

One was a gangly, blond-haired lad named Carl Rackemann from Wooroolin State School which is situated between Wondai and Kingaroy.

The other was a seemingly unflappable batsman named Stewart Green from Theodore State School in Central Queensland. Bear in mind, of course, that I was focused on local players and didn’t really get to take in the efforts of all the teams on each of the days.

For seven days in Rockhampton’s gruelling summer heat, Rackemann and Green stood out among all the other pre-teens even though they did not take the most wickets or score the most runs.

His six-wicket haul came against Central Queensland on the final day and it denied the home side the opportunity of winning the tournament. I have a lasting memory of several of the boys speaking of how scared they were to have to face Carl’s pace.

Here’s a snippet from my report of the game:

Rackemann took six for 26 and helped bundle Central Queensland out for 93. He was helped by his team-mate, Gary Beutel, who took five catches in the slips. 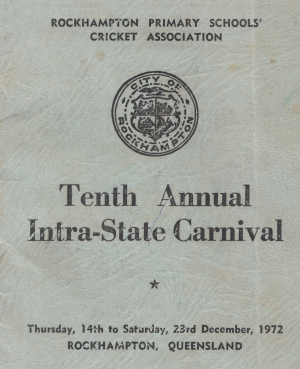 As an aside, both Central Queensland and Wide Bay finished with five wins and two losses for the carnival. The best-performed team and winner of the Dibdin Cup, was Brisbane’s No.2 side which also had five wins and a tie with their Brisbane No.1 rivals.
Some other notable performers over the course of the event:

Day 1: Russell Darby from East Ipswich snared a hat-trick in figures of 5 for 44 but his team lost to Wide Bay for whom Rex Lohse from Gympie took 5 for 40 and Carl Rackemann 3 for 20. Peter Smith from Nambour took 6 for 51 against CQ.

Day 2: Gary Neilson from Yandaran State School north of Bundaberg had the second best single innings figures of the tournament with 7 for 17 and as well took 3 for 20 in the second innings of that game. That followed 65 runs with the bat on the previous day. Three players had five-wicket hauls:  Kelvin Newman from Park Avenue, Rockhampton, had 5 for 33; Ray Durre from Harristown State School, Toowoomba, had 5 for 26 against Brisbane No.2 and Gary Boardman of Clontarf Beach State School, Redcliffe, had 5 for 31 and 4 for 27 in his side’s win over Wide Bay.

Day 3:  Ken Renikka, of Maryborough, notched the first century of the carnival with 102 retired against Brisbane No.1. For Brisbane No.2, Andrew Radcliffe, of Coorparoo State School,  took 5 for 24 against CQ.  Steve Bleakley, of Morayfield State School, had figures of 5 for 22 and 2 for 3. Steve later played rugby league at A-grade level for Redcliffe.

Day 4: Clontarf Beach player Gary Boardman continued his success with the ball with 6 for 38.

Day 6: Brisbane No.2 player, Scott Lacey, of Dutton Park School, Brisbane, score 97 not out against Carl Rackemann’s bowling in his side’s loss to Wide Bay. Carl had figures of 2 for 12 and obviously did not bowl much. For Brisbane No.1, Kent Fisher, of Yeronga State School, had figures of 6 for 58 against Pacific.

Day 7: Carl Rackemann had 6 for 26 against CQ as previously mentioned. Representing Brisbane No.1, Dan Reinbott, of Coorparoo School, Brisbane, had the best single innings figures of the tournament with 8 for 23 against Ipswich.

The biggest shock, for me though, came with the announcement of four teams at the end of the event which were really an acknowledgement that these were the ‘best’ players. The teams did not play any games.

Why a shock? Carl Rackemann’s name did not make it to the list! To this day that still amazes me on one level but not on another.

The teams would have been selected by the teachers involved and they are not always the best judges.

As expected, Stewart Green was named in the No.1 Country team. The talents of a couple of other young lads—Robbie Kerr, Brett Henschell and Michael Maranta—were recognised though and they did go on to play at first-class level.

Rackemann would eventually go on to have a significant career that included playing for Australia and Queensland. Robbie Kerr also had two tests for Australia.

This is a brief outline of their achievements.